Reader Gary made a comment late last month about unusually heavy hoar frost in Fairbanks and a lack of wind all winter.  Presumably the two are related, as any significant wind would tend to disturb delicate frost formations and also enhance sublimation.  Naturally I got to wondering about what the data show for the wind speed this winter as compared to prior years - how unusual is the lack of wind?

The chart below shows the number of days in each winter on which sustained wind speeds of at least 5 knots (blue) and 10 knots (red) were observed between November 1 and February 8.  The discontinuity in 1996 is definitely related to the introduction of ASOS instrumentation, so the numbers are not directly comparable between the pre-1996 and post-1996 years; but the longer-term history is interesting nevertheless. 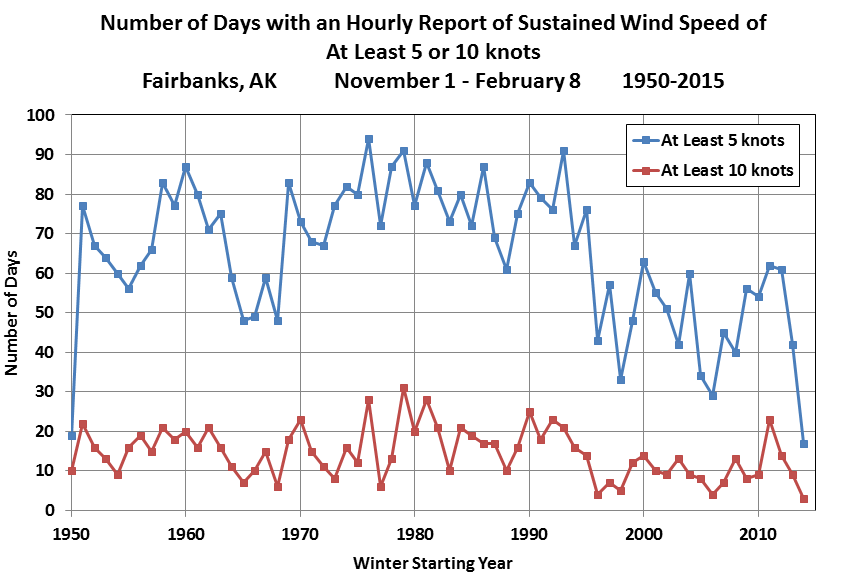 Remarkably, this winter since November 1 has seen only 3 days with a wind speed report of at least 10 knots, and only 17 days of 5-knot winds or greater; both of these are record lows.  Put another way, the wind speed has remained below 5 knots for every hourly observation during 83 of 100 days since November 1.  The peak sustained wind speed since November 1 is only 11 knots (on January 1), which is also a record low.  Therefore based on the data in the hourly observations, it would seem that no winter since 1950 was so lacking in wind as this winter (through February 8).  (We should bear in mind, though, that we can't be sure about the comparison to pre-1996 years.  The late 1960's appear to have been relatively windless.)

The next question is - obviously - why has this happened?  It's surprising, because we normally associate calm conditions with unusual cold in winter - but of course it was extremely warm until late January, and the inversion strength was generally a bit weaker than normal.  The mean pressure has been a little higher than normal (see below) over much of the state but does not suggest a major reduction in the normal north-south pressure gradient.  I quickly looked at the 850 mb wind speed and it has been slightly higher than normal since November 1, so we can't blame the overall flow pattern.  Thus we have a mystery that is worth investigating more carefully in a future post. 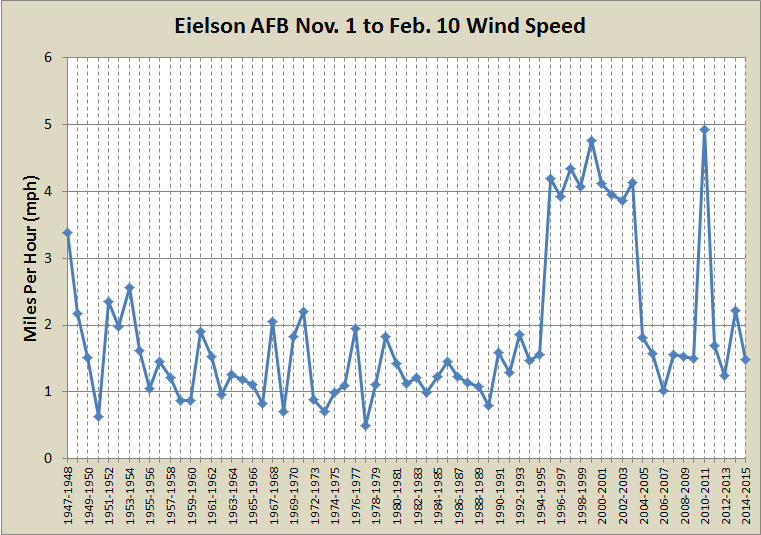 Obviously there are a few outlier years. The winder of 2010-2011 has no days with calm winds and a lot of Missing ("M") observations. Most likely, those are calm wind observations. The other years 1996-1997 to 2003-2004 are a little more uncertain. 1997 was when the ASOS was installed so that explains part of it. If we ignore the anomalously high years, 2014-2015 appears unremarkable.