Regular readers are probably surprised to see such a blizzard of posts from me this week, but the cold snap now unfolding across Alaska is an historic episode that's worth documenting.  In the depths of winter this would be a hefty cold outbreak; but here we are, nearly 3 weeks after the equinox; the North Slope is already seeing 15 hours of daylight.  And of course the chill is all the more noteworthy in view of the general absence of really significant cold in recent years.

To illustrate the character of the air mass moving down across northern Alaska today, here are hourly conditions from atop the Dalton Highway at Atigun Pass.  A temperature of -42°F with a 19mph breeze amounts to a wind chill of -77°F in the latest observation; and that was in the middle of the afternoon. 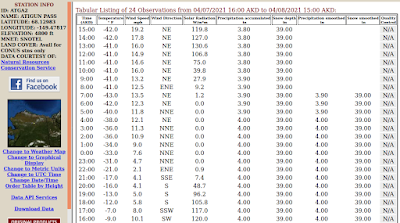 Lower elevation Brooks Range sites, and most locations on the interior North Slope, have been in the -20s this afternoon, although Toolik Lake is sitting just below -30°F.  Anaktuvuk Pass dropped to -32°F with a gusty breeze earlier today.  Here are a couple of webcam photos showing the hazy sunshine there this morning. 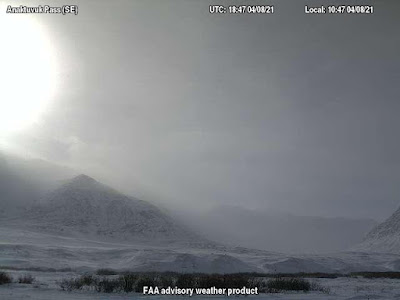 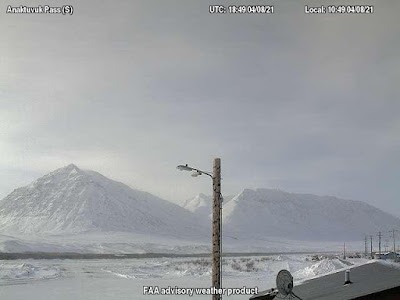 In terms of records for the time of year, they will be too numerous to list by the time we get to the weekend.  Bettles failed to reach 0°F today, even with brilliant sunshine; this is the latest sub-zero day of record at Bettles (1944-present).  As of this hour, Kotzebue has only reached -10°F; this would be the coldest on record so late (although the day isn't over and -9° wouldn't quite do it).

Even on the North Slope, we're close to record levels: Umiat's high of -18°F (as of 5pm) is very nearly the coldest this late in the season.  Up at Deadhorse, the combined Deadhorse/Prudhoe Bay history since 1968 has only one day with a -20°F high temperature at a later date: April 12, 1985.

The real "fun" will begin tonight when the sun goes down; many locations will fall into the -30s, some will drop below -40°, and we may very well see a -50° either tonight or tomorrow night.  The short duration of night will of course limit the additional cooling; but the sheer magnitude of the cold argues for a severe extreme.  Consider this: by tomorrow morning, the air over Fairbanks is likely to be colder (based on 850mb temperature) than anything seen - at any time of year - since January 2012.