Another Very Warm October in Barrow

Another October has come and gone, and that means that once again Barrow had a very warm October: the average temperature was 24.7ºF, which is 7.5ºF above the 1981-2010 normal. This ties for the fifth warmest October of record and seven of the ten warmest have occurred in the past 15 years. Here's an updated plot of the October mean temperature at Barrow since the second order Weather Bureau station opened in 1920: 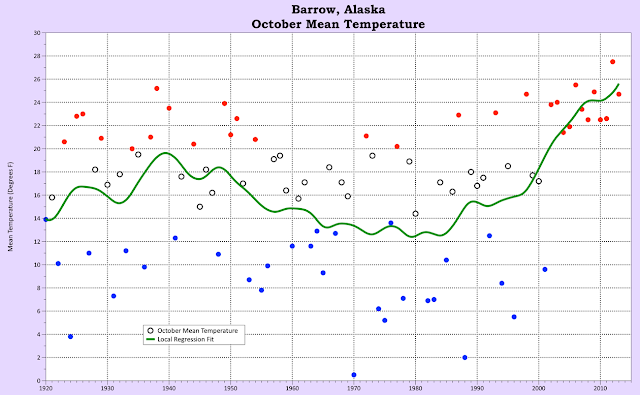 I've segregated the data into tercile values for the full 94 years: colder than 14.2F, warmer than 19.6 and then the middle tercile 14.2-19.6F. So this means that by definition, one third of the 94 Octobers  are "warm", one third middle and one third "cold". The green line is a local regression fit (LOESS) that preserves timing of changes multi-year variation (as e.g. a centered running mean would). Obviously, the run of overheated Octobers since 2002 are unprecedented in the 94 years of unbroken instrumental observations.

In spite of the sea ice edge being closer to the Alaska coast at the end of the summer than it has been in some years, the ice was slow to return to the coast. Here was the view from the Barrow sea ice webcam late on the afternoon of October 30th. As you can see, no ice was visible looking north, and reports on the ground confirmed that no sea was visible the on the morning of November 1st. 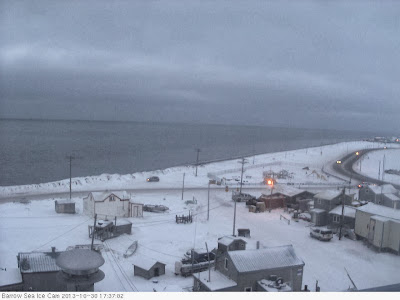