In view of recent freezing rain in Fairbanks, and also in many other Alaska locations, it's interesting to look at the history of winter rain events in Fairbanks.  Of course, the phenomenon is very unusual because of the difficulty of getting warm enough air into the Alaskan interior in winter, but when it does occur it's very problematic.  As Rick wrote elsewhere, "Freezing Rain in Fairbanks is a serious pain. Because the ground and road surfaces are well below freezing from October through March, any rain, even if it falls when air temperatures are above freezing, can cause severe travel problems. Significant amounts of rain will usually produce significant ice accretion on roads that persists, at least on some lower traffic roads, until late March or early April."

The chart below shows the annual number of significant winter rain or mixed rain/snow events (November through March) since the winter of 1917-18. The cluster of events in recent years is evident (Nov 2010, Jan 2013, Nov 2013) and has resulted in an up-tick in the 15-year trailing average frequency. However, there have also been periods in the past when winter rain occurred with higher than normal frequency, notably in the 1960's, in the 1920's, and in the remarkable winters of 1935-36 and 1936-37, when rain occurred five times. If anything, it appears that winter rain has become somewhat less common over the past century, although I am not sure if the trend is statistically significant. 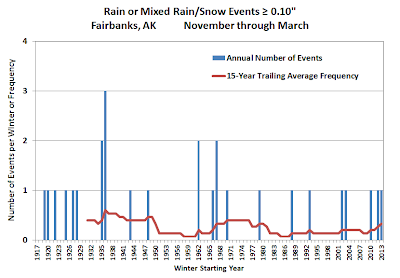 Winter rain in Fairbanks is most common in November and least common in December and March, as the chart below shows. It is curious that significant winter rain has never been observed between November 25 and December 23 inclusive; it's not clear if this might possibly be a statistical quirk, but the sudden cessation of rain events in late November does look as if it represents a true feature of the Fairbanks climate. From Christmas on, the distribution of rain events seems fairly random. 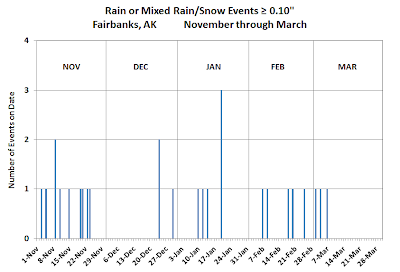