[Updated to include Anchorage temperature at the forecast office, which is the official climate observing site - thanks Rick]

Below are maps showing the October temperature and precipitation anomalies at some primary observing stations across the state.  The area of each circle indicates how unusual the month's conditions were, as measured by the anomaly in standard deviations for temperature and the percentile rank for precipitation (based on the 1981-2010 normals).

The month's average temperature was more than 1 SD above normal at all of the locations shown except Annette Island; the warmest place relative to normal was Cold Bay, with a remarkable monthly average of 3.5 SD above normal.  The return period for an anomaly this large (either warm or cold) in any calendar month is about 185 years (i.e. if the climate were stationary and if the true distribution of monthly temperatures were Gaussian with mean and variance described by the 1981-2010 climatology, then a calendar month this unusual might be expected to occur once every 185 years on average at a single location). 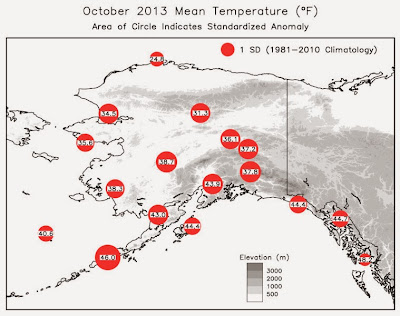 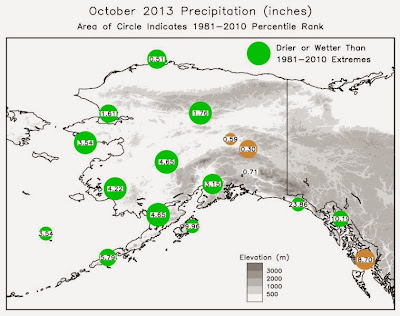 Needless to say, the month was the warmest October on record at many locations, including (ranked from most significant to least):

Precipitation was well above normal in most locations and was the highest on record for October in McGrath.  Barrow experienced its 8th consecutive month of above-normal precipitation.  However, below-normal precipitation was observed at Fairbanks and Big Delta, where downsloping chinook winds kept things dry, and Annette Island, which was close to the apex of the big upper-level ridge.  The map below shows the monthly departure from normal of the 500 mb heights: 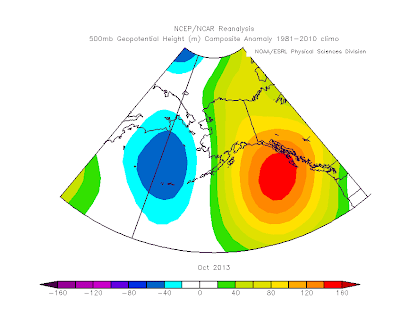 Posted by Richard James at 5:58 AM