This morning's dawn view from Arctic Village features mostly clear skies, some light ice fog, and -42 °F; see below, courtesy of the FAA webcam.  This is the first -40 observation I've seen in Alaska this winter, though there might have been others I missed.  Across the border in the Yukon Territory, the town of Faro reached -44 °F, and Watson Lake reached -41 °F.  Historical data for Watson Lake go back to 1939 and reveal that this morning's chill is close to the coldest on record for so early in the season, although the cold snap of early November 1989 was colder (-46 °F on Nov 12). 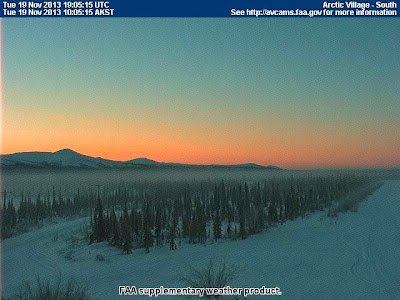