Six months have now passed since the dramatic late spring reversal in Fairbanks temperature anomalies, from persistently below-normal to mostly above-normal (see chart below).  Since late May, unusual warmth has been quite persistent, with only brief interruptions to the prevailing trend.  Remarkably, over 40 percent of the days since May 24 have been at least 1 standard deviation warmer than normal, while only 14 of 185 days have been an equivalent amount below normal.  The distribution of anomalies is shown in the second chart below. 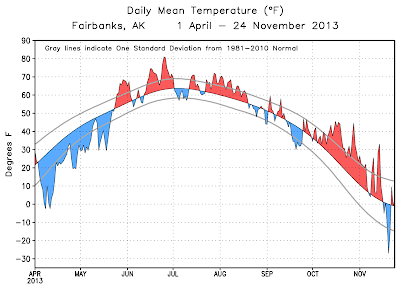 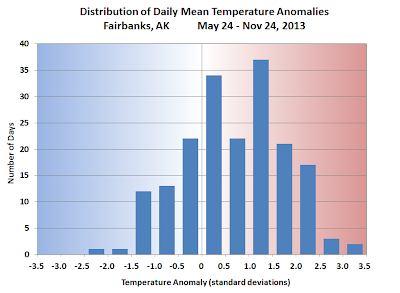 The immediate cause of the persistent warmth is the upper-level ridge that has repeatedly redeveloped over southern Alaska and northwestern Canada, as shown below in the six-month mean 500 mb height anomaly.