A volatile weather pattern is in place across the northwest Pacific and Bering Sea, with a series of storm events affecting particularly the west coast of Alaska but also inland regions.  Computer model forecasts indicate that Fairbanks should see a significant amount of snow in the next week, and temperatures will once again rise far above normal at times.

The chart below shows a time-height cross-section of temperature in the lower atmosphere over Fairbanks, as predicted by a recent computer model forecast; the second chart shows the expected precipitation during the same period, and the third chart shows expected surface temperature (note that the exact values for precipitation and surface temperature should be taken with a large grain of salt).  For several days now, the forecasts have been showing above-freezing temperatures not far above the surface during the upcoming precipitation event for 12 hours or more beginning around midday tomorrow (Saturday).  A likely outcome appears to be snow in the morning hours, changing to freezing rain in the afternoon, then back to snow after midnight.  Temperatures may rise above freezing in the hills, leading to straight rain, but I would think temperatures should remain below freezing at valley locations.  Regardless, with ground temperatures now far below freezing, it will be a messy situation for a time, especially if rain occurs steadily for some hours. 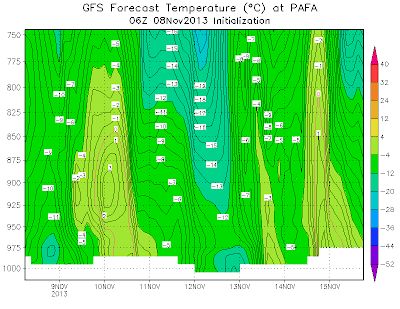 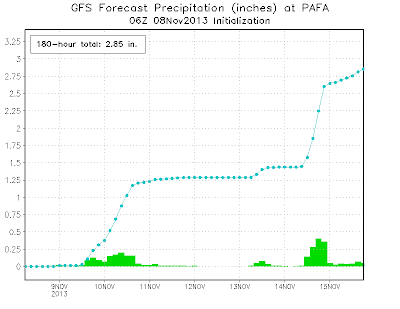 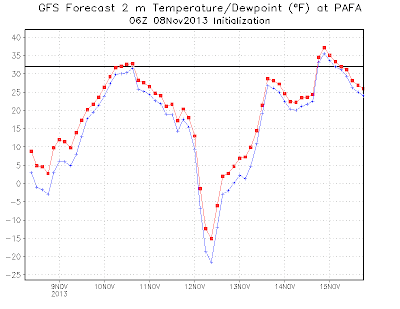 Very chilly conditions return again by Tuesday, but there are indications of another major warming and precipitation event later in the week.  Fairbanks could soon be looking at a healthy snow pack, as an impressive amount of precipitation is being shown by the computer forecast.  Note however that snow is very unlikely to be as heavy as the model is indicating; the November record for total precipitation in Fairbanks is only 3.32" (1970).  The climatological median total precipitation for November is 0.79".