My apologies to those who have had enough of this topic, but I think I've finally arrived at a more satisfactory answer to the question of whether and how much snow cover affects temperature at this time of year in Fairbanks.  Hopefully I won't try anyone's patience.  To recap briefly, my first attempt found a fairly strong connection between lack of snow cover and unusual warmth in late autumn, but later analysis prompted by comments from reader Eric helped to clarify that this is mostly a reflection of the larger-scale weather regime.  I showed that a lack of snow cover is not correlated with warming at the surface relative to temperatures aloft, and for a while I thought that was the final answer.

However, I was troubled by the result, because it is almost an axiom among meteorologists that snow cover causes cooling relative to bare ground - how could this not be true in Fairbanks?  I've often used this belief to successfully adjust temperature forecasts based on knowing what the snow cover is like, and I suspect NWS forecasters do the same in Alaska.  Surely there is something I am missing in the data. 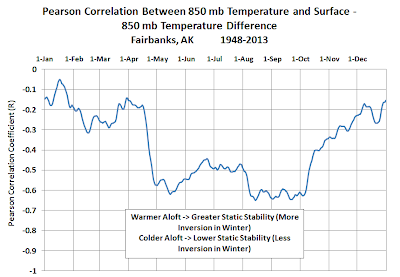 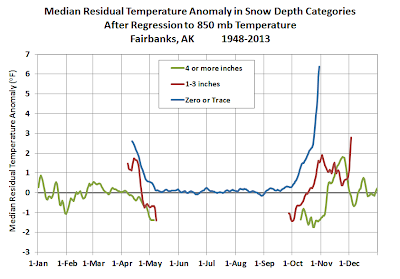 It's interesting to look at the past few weeks to see how temperatures have departed from the expected values based on 850 mb temperature alone.  The chart below provides the answer: Fairbanks temperatures have been running up to 10 °F or even more above the temperatures that we would normally associate with the recent 850 mb temperatures.  The smoothed difference is above +5 °F in recent weeks; this is consistent with the result shown above for the end of October, but is higher than the expected no-snow residual earlier in the month.  Of course, there are many other aspects of the weather pattern (besides 850 mb temperature) that affect the surface temperature, such as cloud cover and wind speed and direction, so we don't expect the no-snow residual to explain everything.  Note that the 850 mb regression uses data from 1948 through July 2013, and does not include the recent conditions. 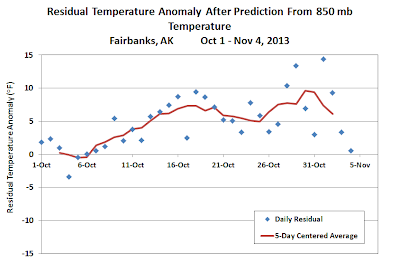 Now that we have an estimate of the cooling caused by snow cover, or warming caused by lack thereof, we can imagine using this information to improve daily temperature forecasts.  To illustrate this in a basic fashion, consider the two charts below: the first shows the October "predicted" temperatures based on 850 mb temperature alone (no snow adjustment and no other meteorological considerations), but the second chart includes the estimated warming effect of missing snow.  Forecasts falling on the diagonal line are perfect.  It's clear that the snow cover adjustment provides a modest improvement by helping alleviate the cool bias, although the adjusted forecasts are still too cool. 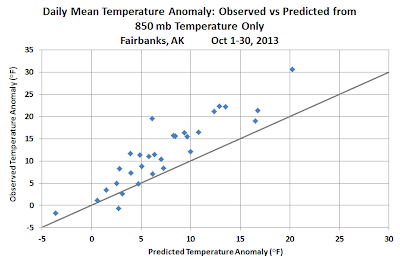 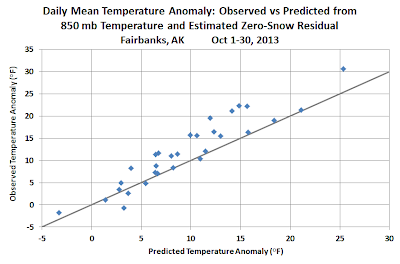 Finally, here are a couple of zoomed-in charts to show the distribution of the temperature residual associated with zero or trace snow cover in autumn and spring.  There is not enough historical data to provide estimates after October 30 or before April 12 (I required at least 10 years since 1930), but it seems likely that the warming effect of no snow would be at least as great for nearby dates.  And therefore until snow cover is properly established in Fairbanks this year, we expect that temperatures will (on average) stay much warmer - probably at least 5 °F warmer - than the airmass temperatures would normally dictate for this time of year. 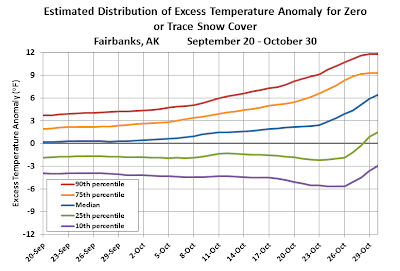 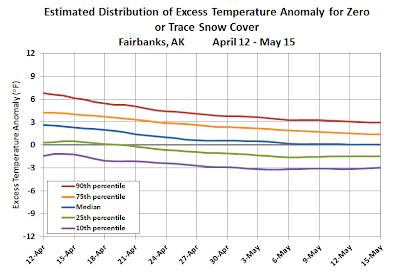