According to a News-Miner article on Wednesday, an anemometer atop the GVEA administration building in Fairbanks recorded a peak wind gust of 83 mph during the November 13-14 storm.  While the measurement is not comparable to the official history of wind measurements from the airport, the report is impressive and led me to wonder how the airport observations in the recent storm compared to past events.   The chart below shows the annual maximum wind speed in Fairbanks according to the GHCN daily data; note that various time averaging periods were reported at different times in the history. 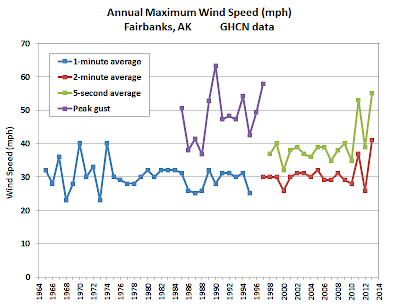 The highest 5-second or greater wind speed in the GHCN data is 59 mph on April 18, 2003, but this report appears suspect to me because the 2-minute maximum for the same day was only 12 mph, and there does not appear to have been anything unusual about the weather situation that day; I excluded the report for the chart above.  Ignoring the 2003 event, the official measurement of 55 mph on November 14 is the highest on record for a 5-second period or greater; higher "peak gust" values were reported in July 1990 and June 1997.  The recent 2-minute report of 41 mph also narrowly exceeds the peak 1-minute values in 1970 and 1974.

It's also interesting to examine the annual values of the peak wind speeds in winter - see the chart below.  Note that I have excluded March here, because average wind speeds pick up considerably in March (see second chart below) and I thought it would be most valuable to look only at the deep winter months with similar wind behavior.  Interestingly, in 3 of the last 4 winters (including this one to date), the peak 2-minute wind speed has been at the upper end of the historical distribution - and so it appears we can say that Fairbanks has had a run of unusually strong wind events in recent winters.  The behavior of peak wind speeds in April through September (the "less calm" season) does not show any similar trend (third chart below). 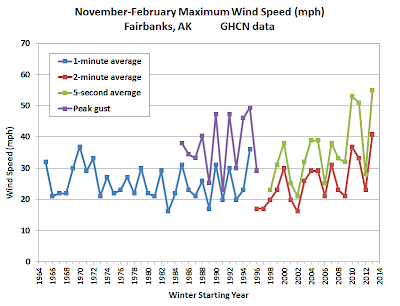 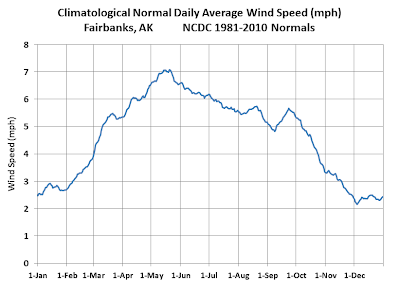 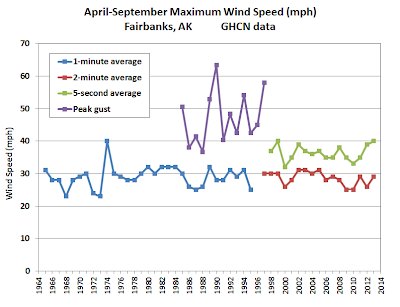 Posted by Richard James at 1:07 PM