Continued cooling over interior Alaska has produced the season's first reports of -50 °F today in the southeast; here are some of the colder observations:

According to the GHCN data, it is somewhat unusual for -50 F to be reported this early in the winter in Alaska; it happens once or twice a decade on average.  The earliest observation of -50 F was on November 4, 1945, at Allakaket (-53 F).

In the far north of Alaska, the polar night has now reached Barrow, where the sun set three days ago for the last time this year.  The FAA webcam image below shows the southern horizon today at close to solar noon. 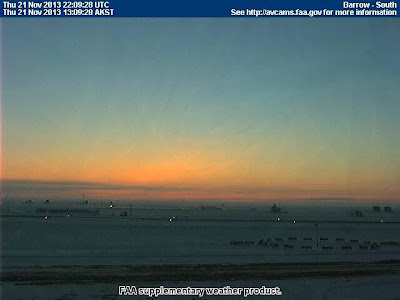 Posted by Richard James at 2:40 PM