For this post we will have a slight geographical deviation from Interior Alaska. One of the many atmospheric impacts of the Funny River Horse Trail Fire has been the effect of dense smoke on incoming solar radiation. There is a body of research that looks at temperature effects due to smoke across large areas due to widespread smoke but relatively little on localized dense smoke and the accompanying reductions in incoming solar radiation. It may or may not be analogous to the effect of clouds on temperatures at the surface. In any event, the effect was immediate and substantial. The Fire is an interesting laboratory for looking at this relationship.

There are 8 Climate Reference Network (CRN) sites in Alaska. One of them, Kenai 29 ENE, happens to be in the Kenai National Wildlife Refuge a few miles north of the Funny River Horse Trail Fire. One of the many sensors that CRN sites have is for measuring solar radiation. In the first few days of the fire the wind blew from the north, away from the station. Beginning on May 23rd, the wind switched direction and blew from the south, toward the station.

We can evaluate the effect of smoke on incoming solar radiation by comparing two days that were cloud-free but had different smoke conditions. May 20th was clear with a brisk north wind. All smoke was blown to the south. May 24th was clear but with a southerly wind that blew smoke over the CRN station. While the CRN station does not report visibility, the nearby Soldotna ASOS reported visibility as low as 1/4-mile. The graphic that goes with this post shows the incoming solar radiation (measured in watts per square meter) and the air temperature. The solid lines represent solar radiation and the dashed lines represent air temperature. You can see that the solar radiation dropped by 300 to 450 watts per square meter when thick smoke blew in. The total solar radiation differential between the two days was almost exactly 50%. This overall reduction in energy prevented the temperature from rising after 10 a.m. despite a warmer airmass on the 24th than was present on the 20th (850 mb temp in Anchorage was 1.8°C warmer on the 24th).

Based on the temperatures at surrounding stations, the dense smoke likely suppressed the high temperature at the Kenai 29 ENE station by approximately 6°F. While the number of conclusions that can be drawn from a sample size of 1 is pretty limited, the anecdotal evidence is pretty compelling. Since there is a CRN site just northeast of Fairbanks, Fairbanks 11 NE, it would be interesting to go back and look for instances of dense smoke on otherwise clear days. 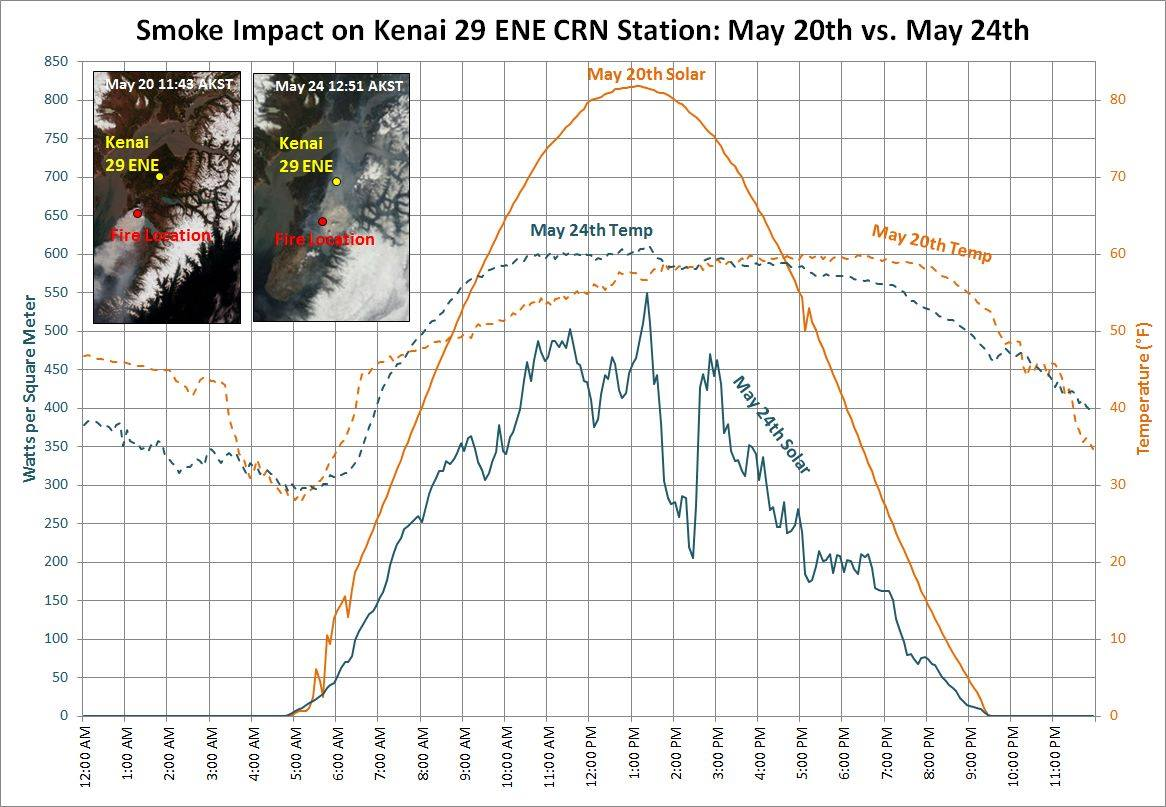 Note: I put this chart up on my FB page earlier so it is possible that some people might be seeing this for the second time.

Additional materials: Here is an article from 1981 that discusses large-area temperature cooling due to smoke. It is from 1981 but is still interesting. In the article the temperature reduction in Alaska due to smoke in 1987 was 2°C to 4°C. : http://climate.envsci.rutgers.edu/pdf/RobockForestFire91JD02043.pdf