This is a follow-up to last week's post on the frequency of occurrence of upper-level high pressure systems, where I showed that the global reanalysis data indicates a higher frequency of blocking highs in recent years to the north of Alaska and over Greenland.  It is interesting to see what the patterns look like for cut-off low pressure systems; these events are considerably more frequent than cut-off high pressure centers at most locations.  The three maps below show the frequency of cut-off low pressure centers at 500 mb, for three successive periods, using the same method as in the previous post. 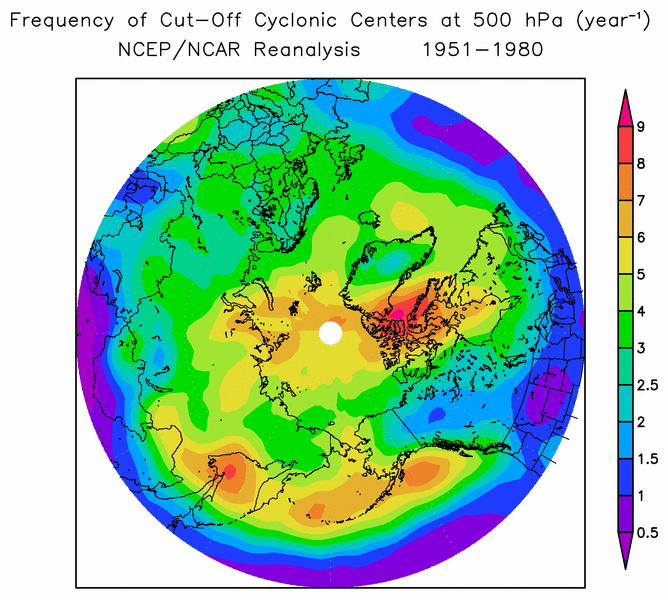 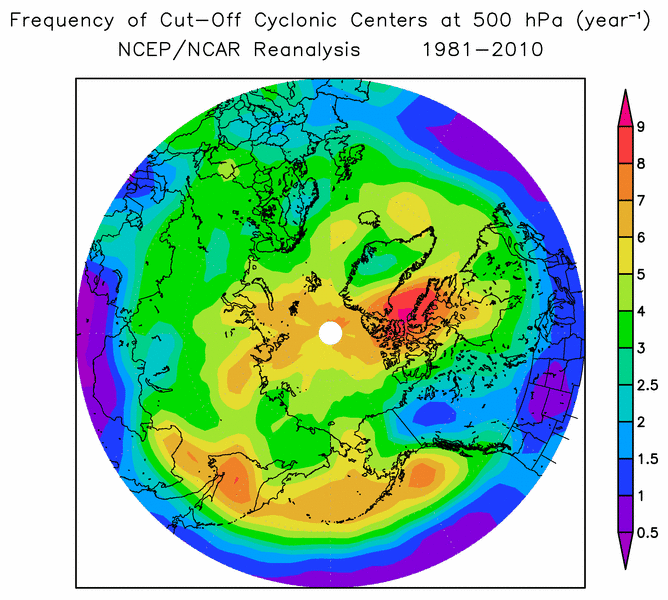 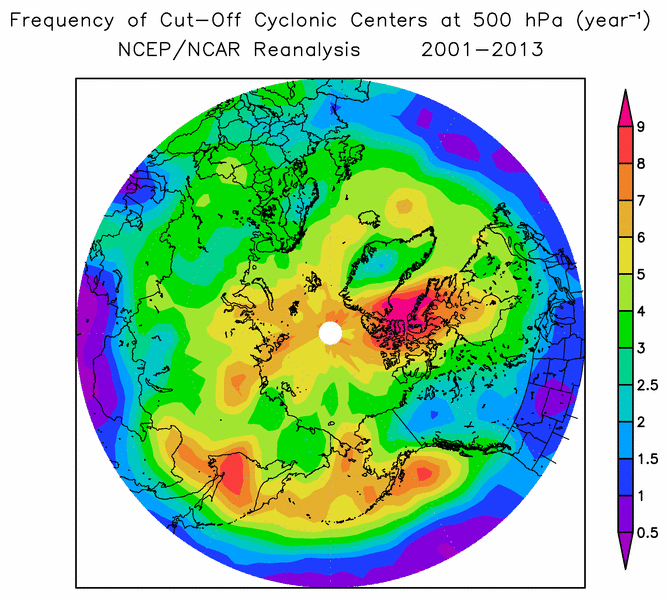 The maps reveal that upper-level cyclonic systems are most common over the northern part of Baffin Bay; the semi-permanent wintertime cyclonic swirl in this area is often referred to as the polar vortex, although the polar vortex is much more clearly defined and more stable in the stratospheric circulation.  There is also a high frequency of cyclonic action in much of the high Arctic and in the zone from the Sea of Okhotsk to the Gulf of Alaska.

The change in frequency from 1951-1980 to 2001-2013 is shown below; it's rather a noisy map, with a lot of small-scale features, but overall it seems there has been a net increase in the population of cut-off lows. 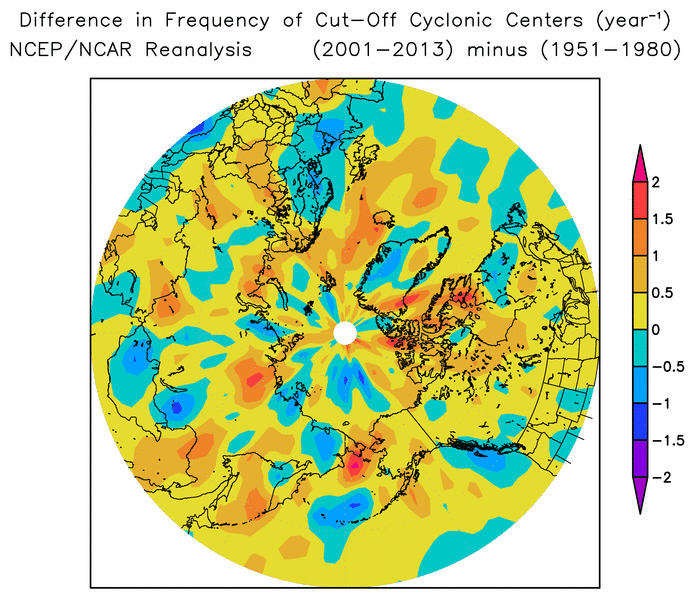 In view of the increase in frequency for both blocking highs and lows, we might expect that the mean westerly flow aloft has become weaker over time as the flow is more often blocked or stagnant.  This would be consistent with the hypothesis regarding potential implications of warming in the Arctic: as the pole-to-equator temperature gradient weakens, the jet stream will also weaken.  The maps below show the mean westerly wind in the three periods and, lastly, the difference between 1951-1980 and 2001-2013.  There has clearly been some weakening near the wind maxima off the northeastern United States and in the western Pacific; but the westerly wind has strengthened in some other locations, notably over central Asia.  A little more investigation would be required to measure the net decrease (if any) in westerly momentum. 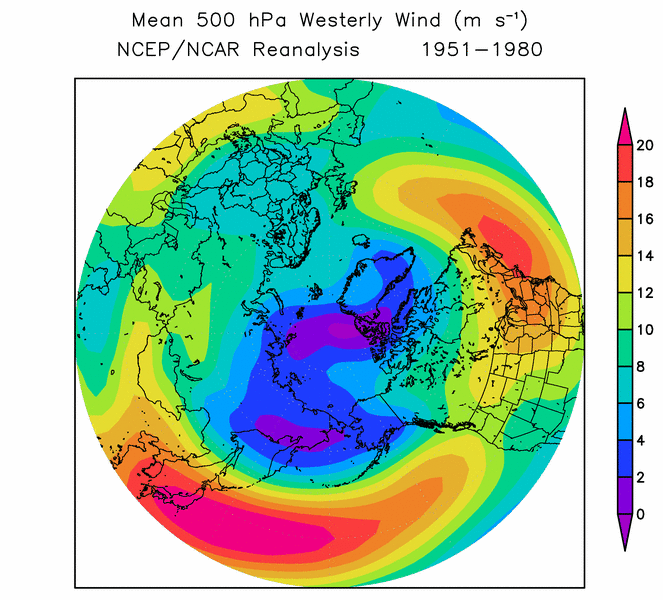 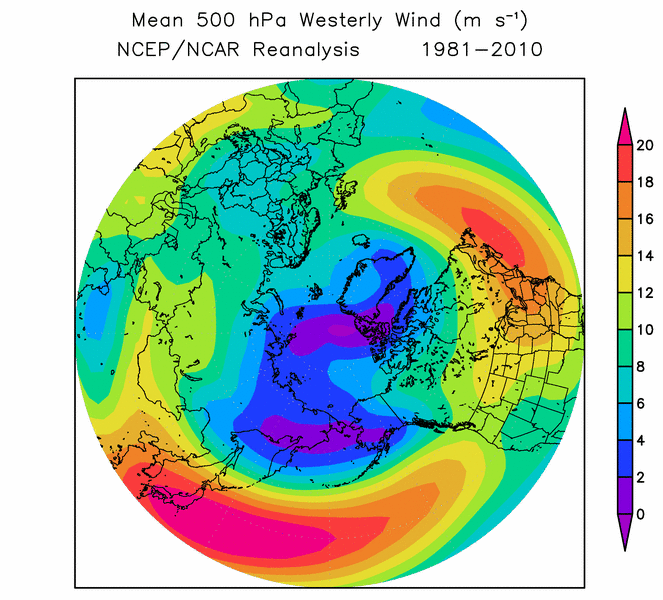 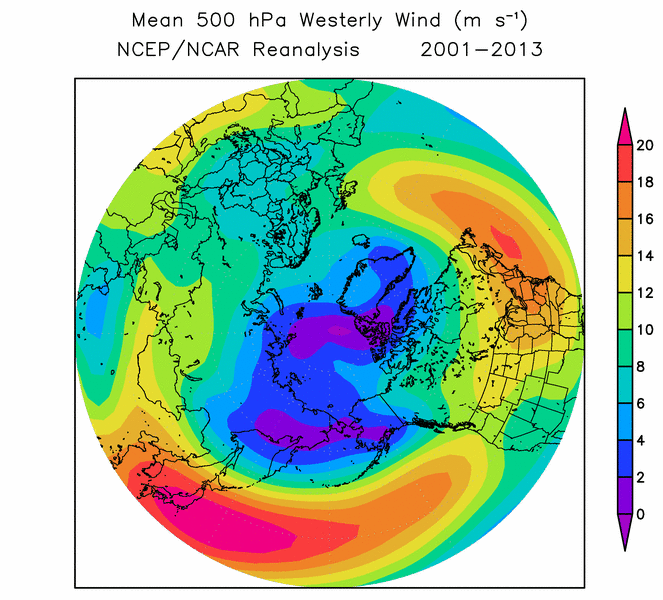 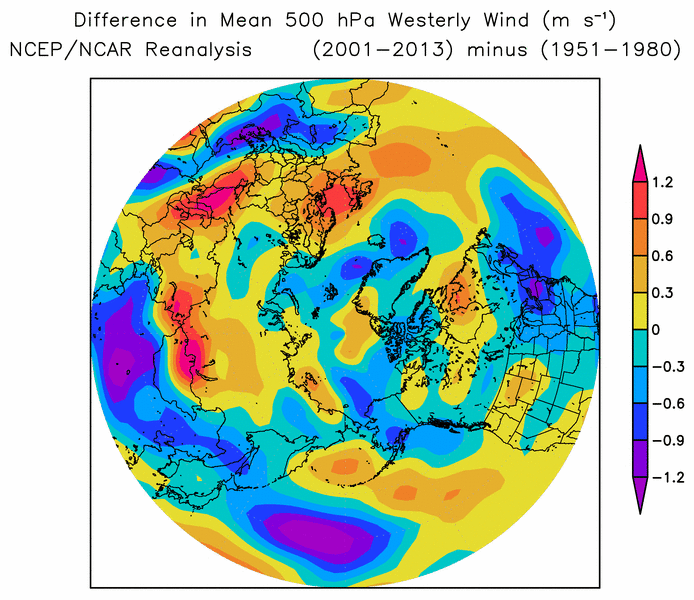 Update: reader Eric asked about the ratio of cyclonic to anticyclonic blocks.  The map below shows the ratio of the frequencies for the entire history; cyclonic cut-off centers are more common in most locations, although eastern Alaska and northwest Canada are an exception.  In fact, looking again at the first three maps above, it is evident that northwestern Canada and eastern Alaska have the lowest frequency of cut-off lows of any northern location (north of 60 °N). 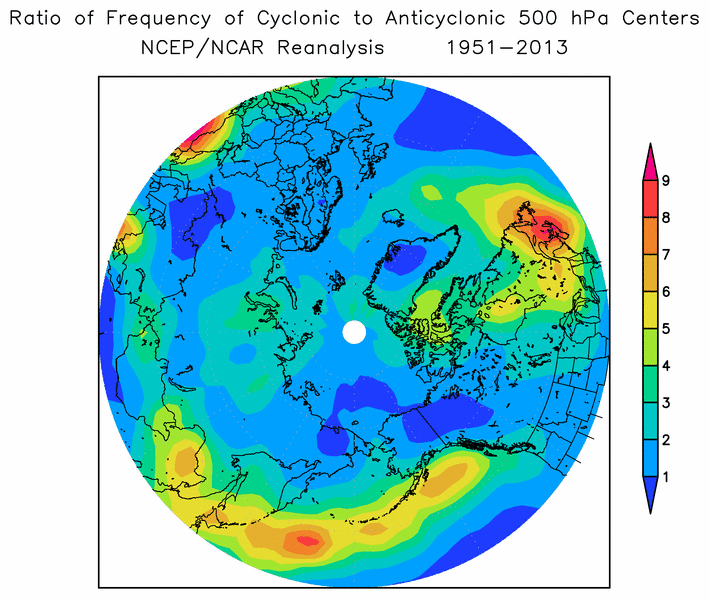