In Brian's post the other day, we saw that lightning activity in the Fairbanks area ramps up extremely rapidly in early June, with lightning being very unusual in May but quite frequent by mid-June.  I was struck by this (can't help the pun) because climatological changes in weather phenomena are rarely defined so rigidly by calendar date.  I was curious about the physical explanation for the rapid change and decided to look up the humidity data to see if a rapid rise in average humidity in early June might be a factor.  In other words, is there - as reader Eric speculated - a humidity threshold that must be met before thunderstorms become reasonably common?

The first chart below simply shows the climatological frequency of thunderstorm days, based on the hourly observations from Fairbanks airport since 1981.  This chart is closely akin to Brian's Figure 4, except that Brian showed an even more rapid rise in the total count of lightning strikes.  This makes sense, because as thunderstorms become more frequent they also become stronger on average, with more lightning strikes per storm.  In any case, we still see a very rapid jump in thunderstorm frequency after June 1, while the decline in late July and August is considerably more gradual. 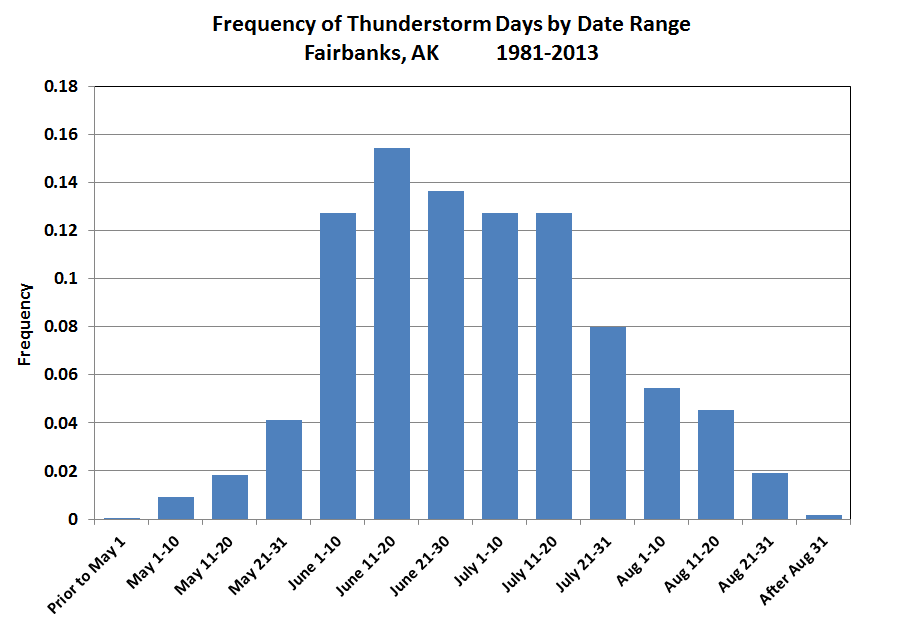 The second chart, below, examines how the thunderstorm frequency depends on the daily (midnight to midnight) maximum in dewpoint temperature.  We see that the majority of thunderstorms in Fairbanks occur when there is rather high humidity, with the daily probability of thunder reaching nearly 30% for daily maximum dewpoints near 15-16 °C (60 °F).  The drop-off in thunderstorm frequency at the highest humidity levels may be an artifact of having too small a sample with such high humidity.  It is interesting that we do NOT see a pronounced threshold that must be satisfied before thunder can occur; the probability rises relatively smoothly with the humidity level. 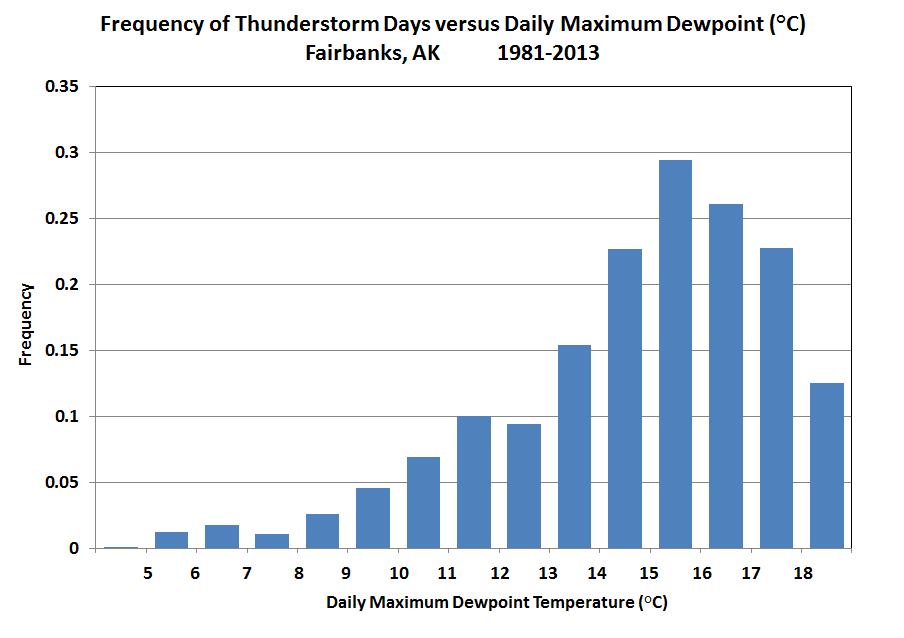 Finally, I looked at the climatological frequency of days on which the daily maximum of dewpoint temperature is 50 °F or higher, which encompasses the great majority of thunderstorm events.  The chart below shows a rapid increase in early June, as for the thunderstorm frequency, but also shows that the climatological peak is much later than for thunder, as high dewpoints are common well into August. 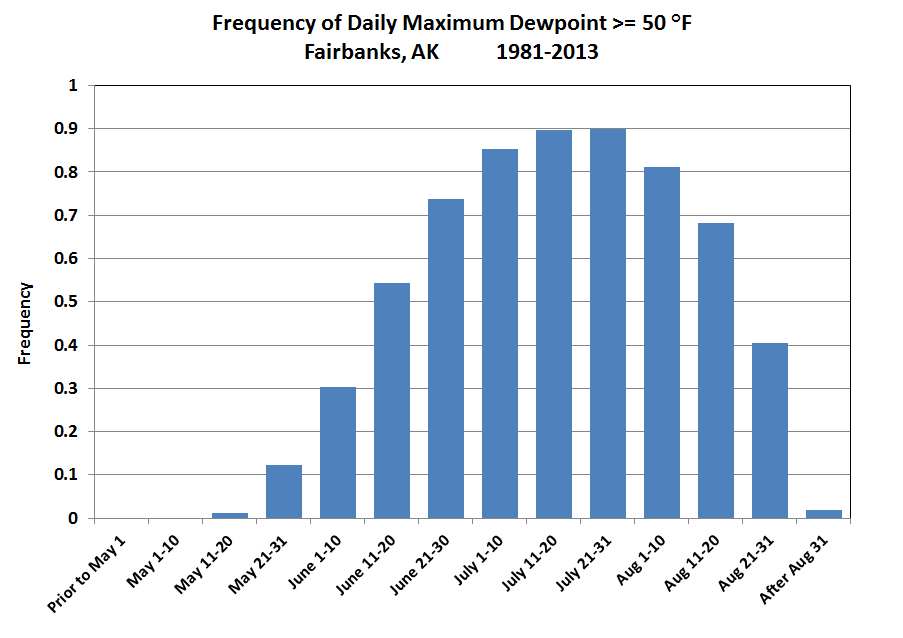 What can we conclude?  It's very clear that the low-level humidity (dewpoint) is not the only factor determining thunderstorm activity, as the storm frequency drops off markedly even while the humidity is peaking in late July.  Moreover, there does not appear to be a hard dewpoint threshold that clearly defines thunder versus no-thunder days.  However, the rapid rise in both thunderstorm frequency and humidity in early June does suggest that the summer influx of humidity is an important contributor to the onset of summer storms.  A next step in the investigation might be to look at climatological changes in the vertical stability profile to see how the rising low-level humidity acts to destabilize the environment and favor deep convective overturning.

As an aside, the highest dewpoint observed so far this year in Fairbanks is 45 °F; and no thunder has yet been reported at the airport.