Last week's post on temperature trends at Fairbanks airport showed that long-term warming (1950-2013) has been most pronounced in winter and that surface temperatures have warmed slightly more than 850 mb temperatures in all seasons.  As reader Mike pointed out, there is naturally some uncertainty as to how much these results are affected by the long-term growth in urban population in Fairbanks, i.e. the development of an urban heat island.  While I won't pretend to begin to address this thoroughly, it's interesting to compare long-term trends from nearby stations in much smaller population centers to see if the results are similar.

There are five stations in the NOAA GHCN database that are both relatively close to Fairbanks and have more than 95% complete temperature data since 1950.  Two of these are in Fairbanks (University Experiment Station and College Observatory) and the other three are Big Delta airport, McKinley Park, and Tanana airport.  The following charts compare the seasonal long-term trends at each of these locations with the 850 mb temperature trends from Fairbanks airport; the charts are shown in order of decreasing data completeness. 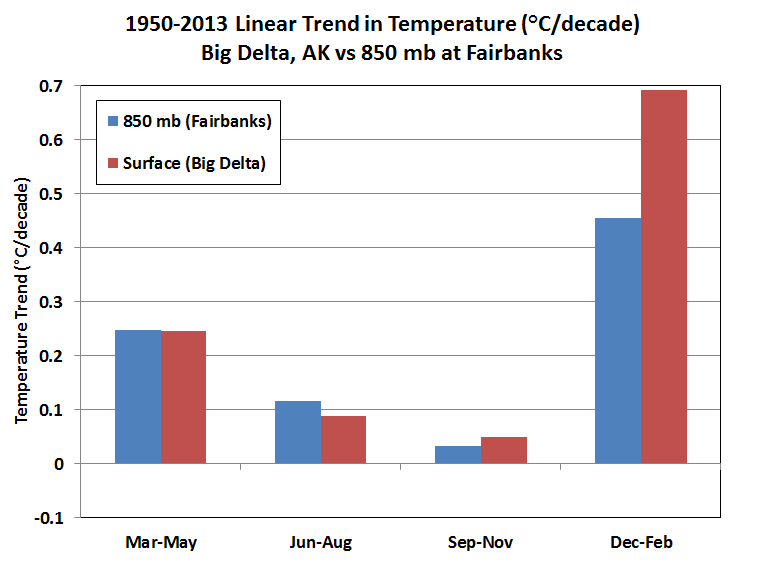 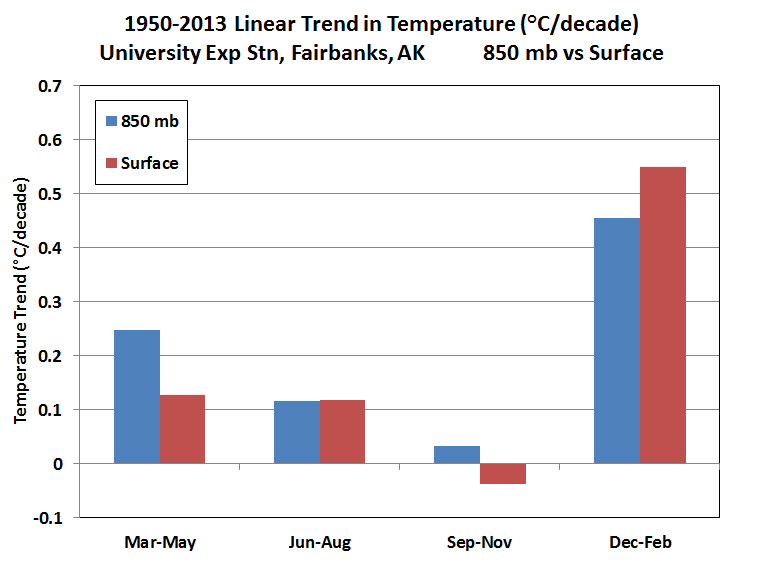 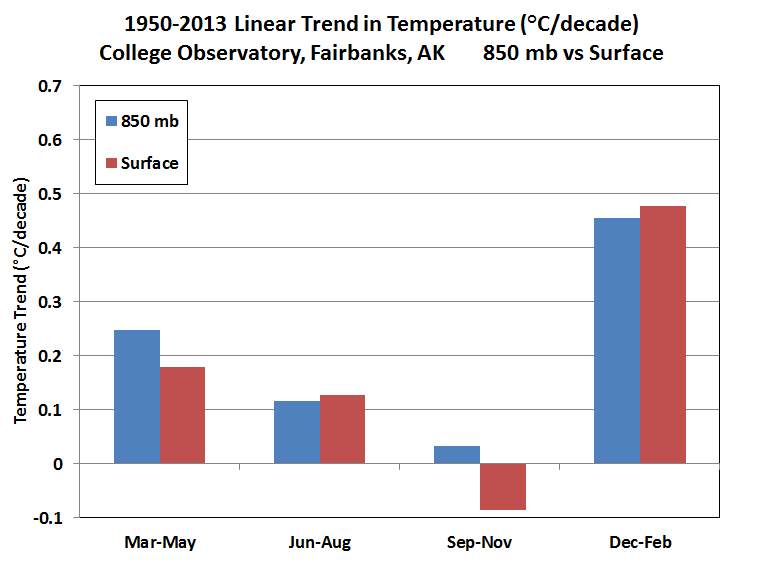 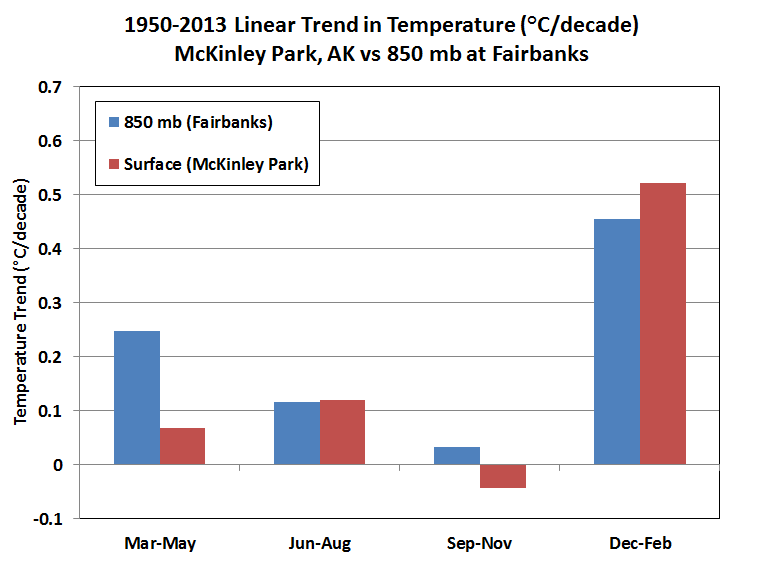 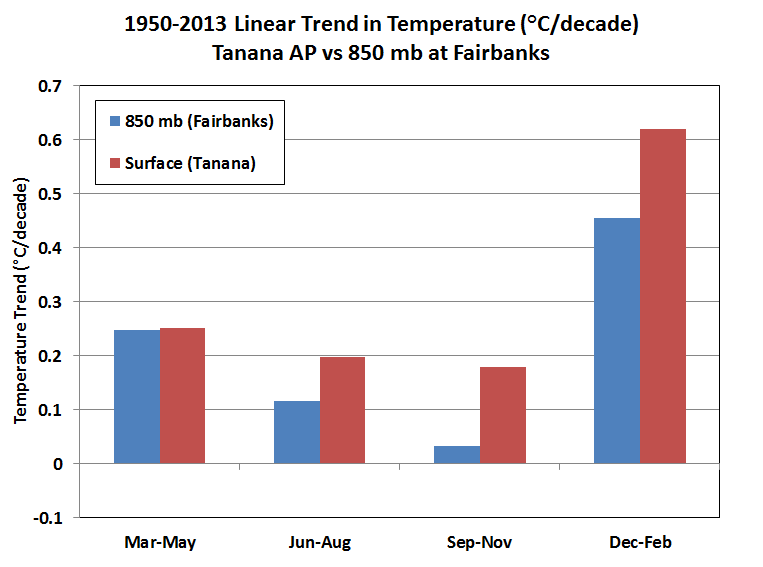 For comparison, here's the chart for Fairbanks airport with the same vertical scale: 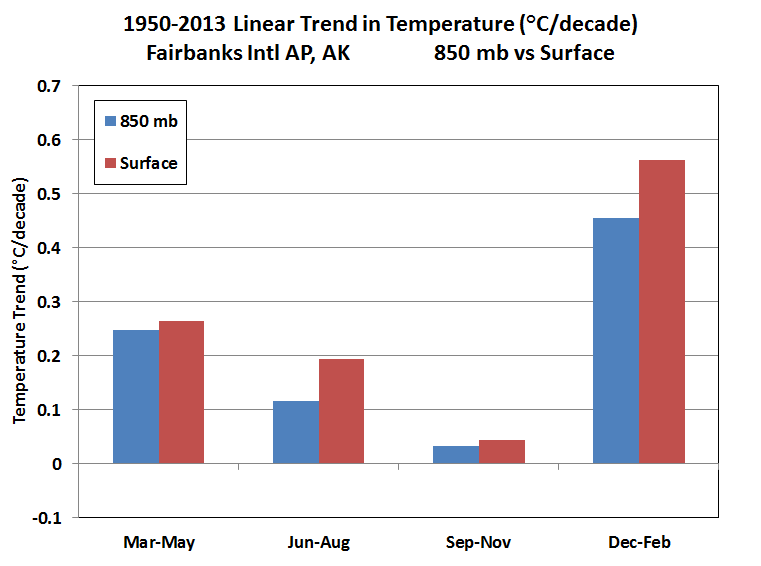 The results from the nearby stations confirm that winter has seen by far the most warming over the long haul in the interior near Fairbanks (and autumn has seen the least).  All five stations also show that winter surface warming has exceeded the 850 mb warming at Fairbanks, so the greater warming at the surface (and slight weakening of the winter inversion strength) appears to be a regional trend.

It's also interesting to note that the surface winter warming trend is greater at both Big Delta and Tanana than at Fairbanks airport, so this does not support the idea that Fairbanks has warmed more than other nearby locations.  A possible conclusion - but one that would merit more investigation - would be that urban warming in Fairbanks is not affecting mean temperatures much differently than in earlier decades.  However, we should not forget that changes in instrumentation or observing site at any or all or these locations may have affected the calculated trends, and so more investigation of the station histories would be required before making more confident statements about differences (or lack of them) in long-term trends.