In a couple of recent posts (here and here) I looked at changes in mean seasonal temperature in Fairbanks since 1950 and compared the changes to several nearby stations and to conditions at 850 mb.  Reader Gary asked if changes in surface winds might have contributed to the surface temperature changes; this is a plausible idea because wind over the Alaskan interior in winter disturbs the semi-permanent surface-based inversion and raises temperatures near the surface.

Unfortunately for this study, I'm not at all confident that historical surface wind speed measurements were made accurately and consistently enough at Fairbanks to allow an investigation of long-term trends; part of the problem is that the averaging time and measurement height of surface wind observations can vary widely.  However, balloon soundings from Fairbanks have measured wind speed aloft since 1948 and - in my view - are more suitable for this kind of analysis.  In earlier decades the balloon's position was tracked with radio direction finding or radio navigation aids, and now of course it's done with GPS.

To begin with, I interpolated the balloon-measured wind vectors to various heights above ground, so that a consistent average could be obtained for each height.  This is necessary because the sounding data is not reported at standard heights except for various "mandatory" pressure levels such as 850 mb.  After interpolating, and excluding any soundings from non-standard reporting hours, I calculated the December-February mean wind speed at each height for each winter since 1950-51.  See the chart below. 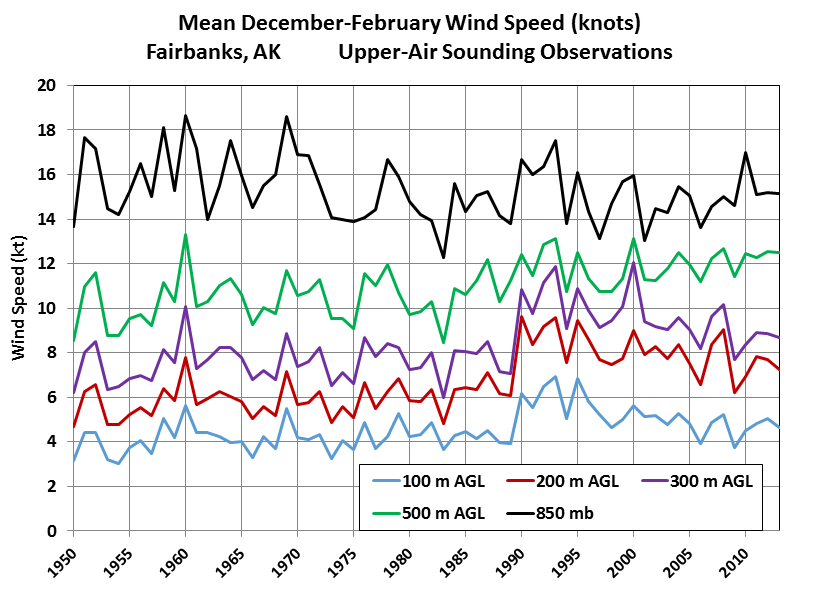 It's not quite clear what to make of these results.  It certainly looks as if low-level wind speed and mixing have increased over time in Fairbanks, although the 100 m wind speed has dropped back in recent years to levels similar to pre-1990.  The puzzling aspect is that 1990-91 does not show up as being particularly significant in the temperature time series (see below), although the inversion was certainly weaker than normal that winter.  With apparently higher mean wind speed throughout the 1990s, we would expect to see a jump in temperatures, but actually it was colder than in the decade following the 1976 PDO shift. 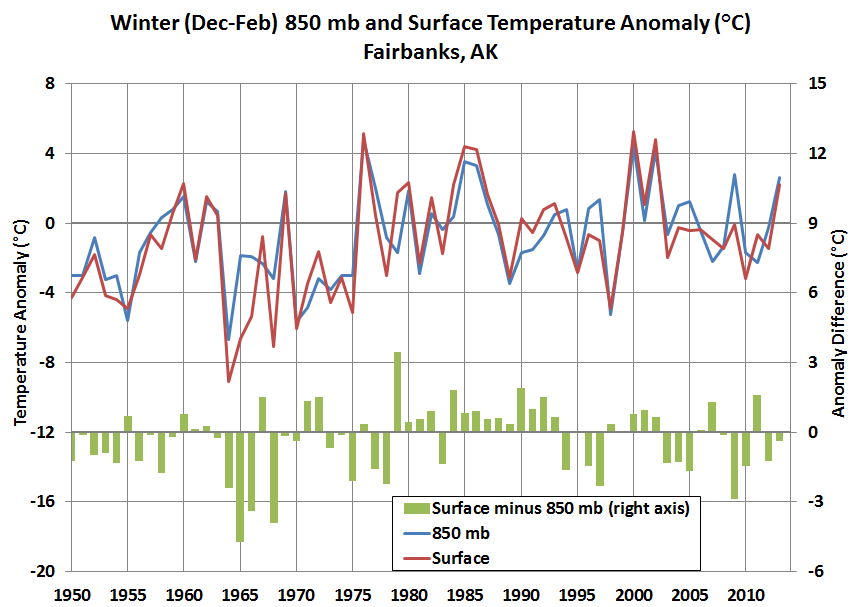 Here's another view of the change in wind speed at 500 m: the chart below shows the changing frequency of wind speed categories.  The long-term trend and especially the change after 1990 is quite striking.  It is tempting to blame all of this on changes in instrumentation or perhaps the vertical density of observations (which could affect the interpolation calculation), but neither of these changed significantly in the vicinity of 1990. 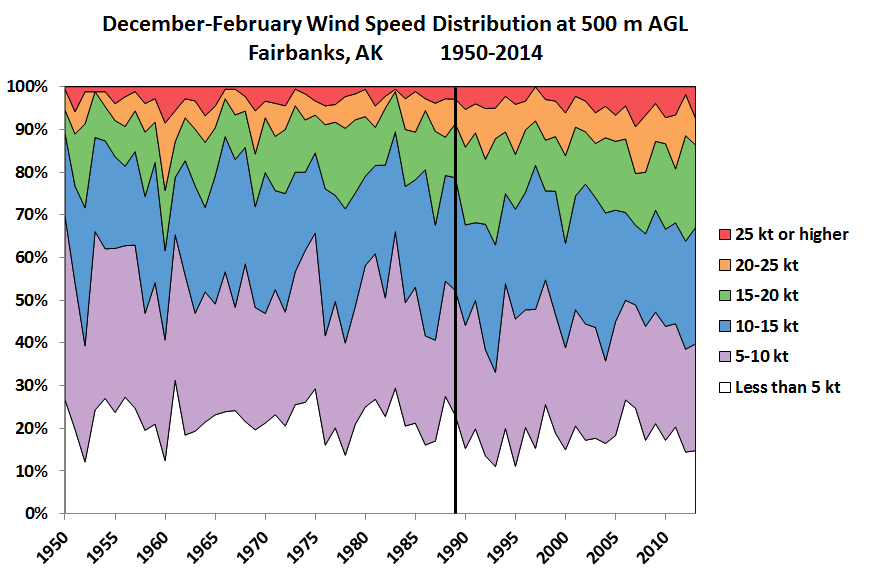 More investigation will be required to examine the physical causes of the apparent change in 1990 and to establish whether it is reflected in any other meteorological data.  As a first, simple step, I plotted up the differences in sea-level pressure, 500 mb height, 850 mb temperature, and sea surface temperature between the pre- and post-1990 winters (see below).  Lower pressure over western Alaska and more southerly flow over the interior is certainly consistent with warmer temperatures, greater mixing, and increased low-level wind speed, but it's not yet clear if the weather pattern changes were in any sense tied to 1990. 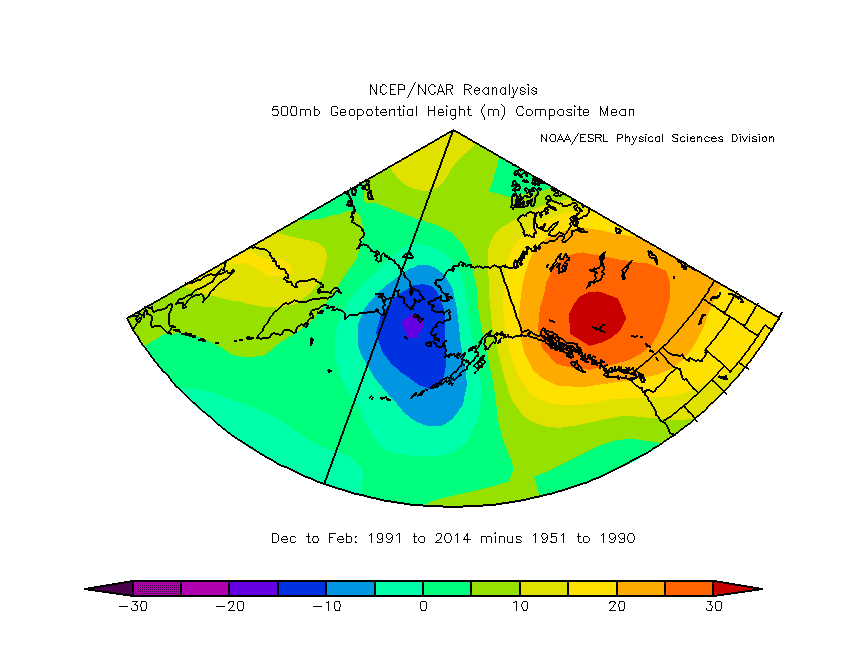 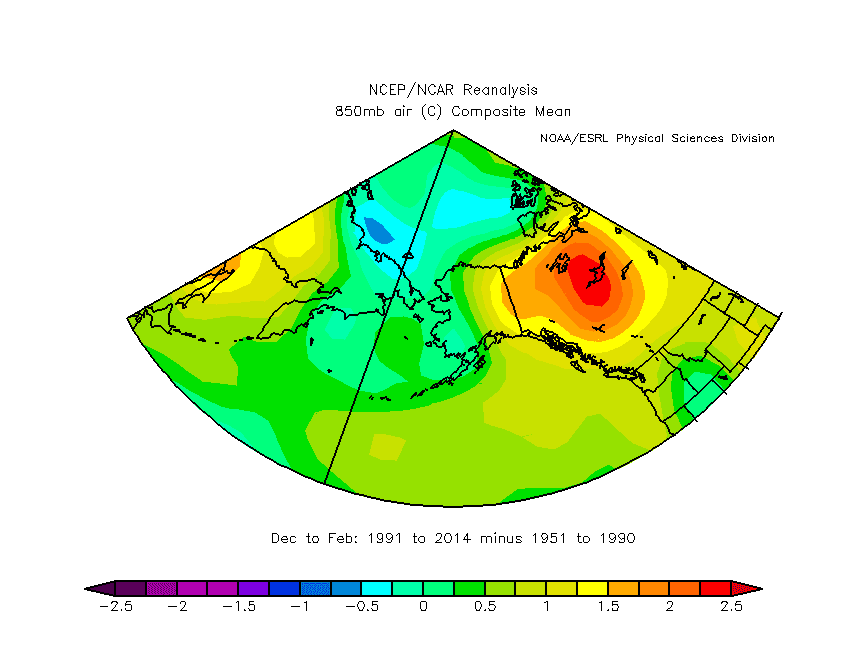 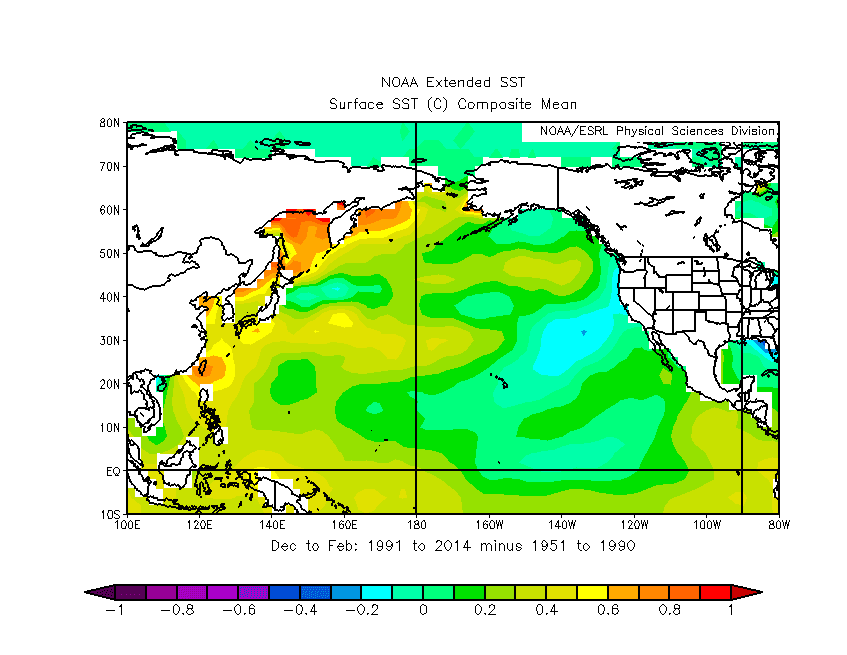