Reader Gary inquired last week about temperatures in Glennallen and their relationship to Fairbanks temperatures.  The two locations are separated by more than 200 miles and the Alaska Range, but the climates are quite similar; both locations are strongly continental, with very large temperature swings from summer to winter.  In the case of Glennallen this is possible because of the Chugach Mountains to the south, which block Pacific moisture despite the ocean being less than 100 miles away.  In fact Glennallen is surrounded on all sides by high terrain, being located in the Copper River Basin, and this allows relatively clear, calm and cold conditions to prevail rather frequently in winter.

The chart below shows the 1981-2010 daily normal temperatures for the Gulkana airport, which is just a few miles from Glennallen, and for the Fairbanks airport.  Fairbanks sees a somewhat larger swing from summer to winter, but overall the large seasonal variations are similar.  Peak summer temperatures occur a few weeks later in Gulkana, which reflects a slightly greater maritime influence in the more southerly location. 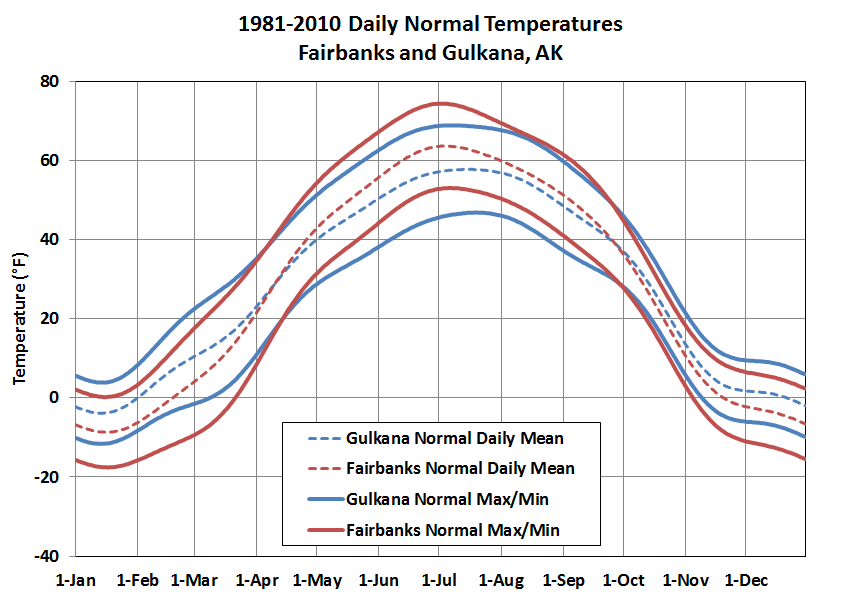 We can get a sense of the variability in temperatures by looking at histograms of daily maximum and minimum temperature for summer and winter, see below.  Starting with winter, the charts show that the Fairbanks temperature distribution is shifted towards the cold side compared to Gulkana, but variability is similar.  Above-freezing temperatures are about twice as common in Gulkana in December through February (10.8% of days vs 5.7%) for the overlapping period of record.  Conversely, temperatures of -40° or below are nearly twice as common in Fairbanks in December through February (11.8% of days vs 6.8%). 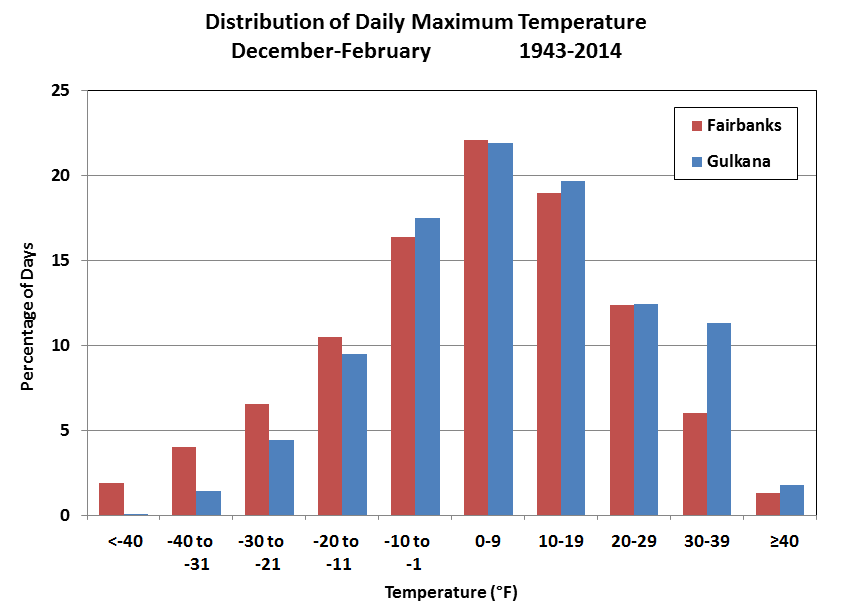 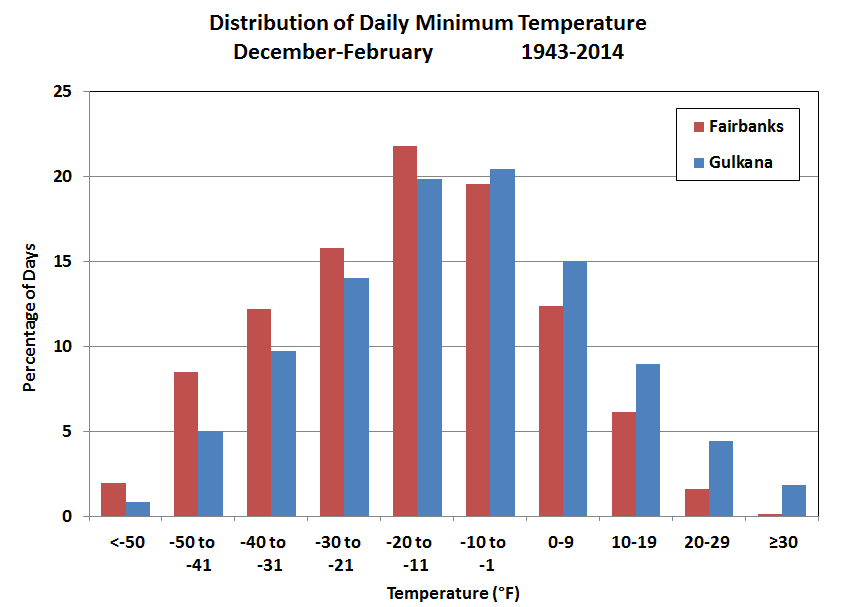 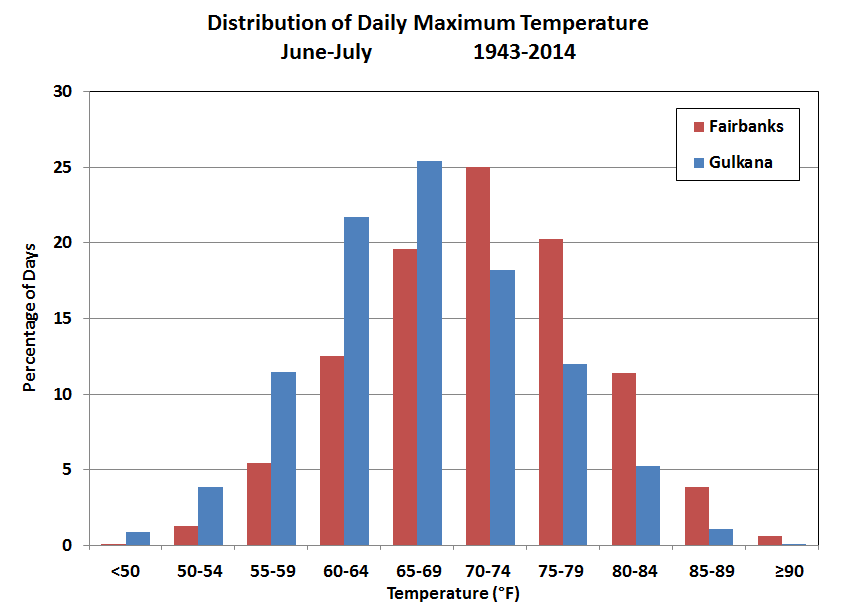 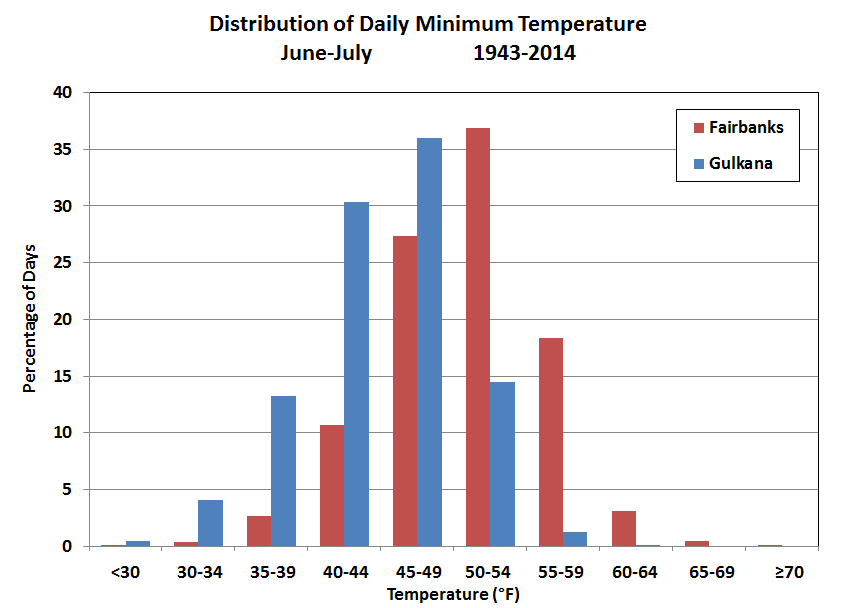 The cooler temperatures overall in Gulkana can be explained partly by the higher elevation (1560' vs 430' MSL).  Cooler nights in particular are the result of lower humidity: Gulkana's average dewpoint in June and July is 41 °F, compared to 47 °F in Fairbanks.  Accordingly, Gulkana is about 10 percent drier in terms of June-July precipitation.  Longer nights may also play a role in nighttime coolness: the sun is below the horizon for at least 4 hours every night in summer in Gulkana.


Lastly, I'll touch on the correlation of temperature variations in the two locations.  The list below shows the correlation coefficients between the two locations for daily temperature departures from normal, based on the 1981-2010 normals and calculated over the common period of record (1943-2014).  Correlations are highest in winter and spring, and are relatively low in late summer when it appears that local variations in cloudiness have a large effect compared to the underlying temperature variance.