The other day Rick noted that snow was accumulating on Keystone Ridge with a temperature of -25°F. That got me wondering how low the temperature can go and still receive accumulating snow around Fairbanks. With the help of daily climate summaries and hourly observations, we can identify the very coldest days with measurable snow. A key part of this analysis is that we eliminated all observations with fog in the wx code. The reason for this is because I am using visibility as a proxy measure for accumulating snow. I sometimes wonder if dense ice fog creates a rime layer that is counted as new snow or if ice crystals can pile up into a minor accumulation. I expect the Fairbanksans reading this to chime in right about now.

In conversations with Rick and Richard, they both agree that a snow observation with a visibility of 3 miles or less will start to accumulate (actually they suggested 4 or 5 miles). Since ice fog nearly always forms when the temperature is colder than -35°F, for practical purposes, this means true snow events with temperatures under this value are not captured in this analysis.

Hourly observations that are coded to identify snow go back to 1960. I paired all of the hourly observations with the daily climate summary to see which days had accumulating snow. The reason we do this is because a day might have a high of -10°F and a low of -35°F with 0.3" of snow. But did the snow fall when the temperature was -10°F, -20°F, or -35°F? That is why pairing the daily and hourly observations makes a huge difference. 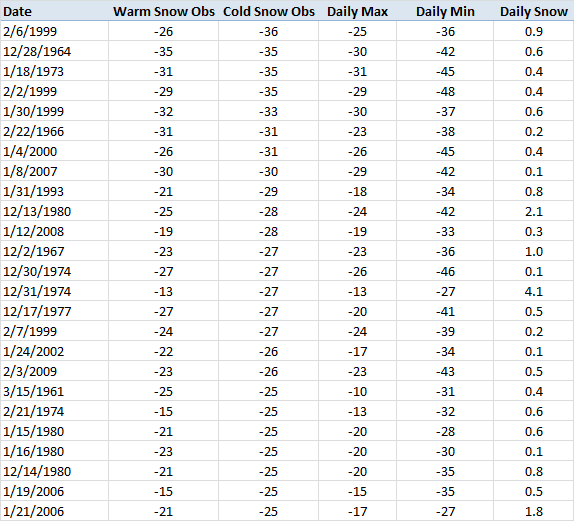 
Remember that the idea here is to set practical bounds on accumulating snow and not to identify extremes. In Table 2, you will see how fog plays havoc with the analysis. On December 28, 1964, one observation met the aforementioned selection criteria (temperature was -35°F) but other observations with fog probably has a snow intensity sufficient to accumulate. 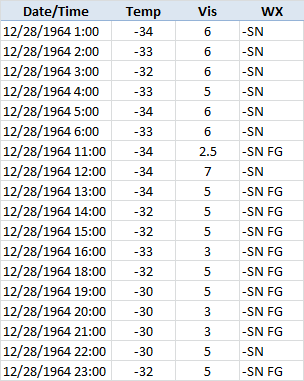 Table 2. All snow observations on December 28, 1964 at the Fairbanks International Airport.

It seems that snow can occur at, and just under, -30°F every once in a while in Fairbanks. At that temperature, there isn't very much moisture in the air (mixing ratio about 0.2 g/kg). Unfortunately the hourly observations and the daily summaries leave much of the story untold. This is a great example of where local knowledge can supplement technical documentation.