After reading Richard's excellent post the other day, I though it would be interesting to see if cyclical patterns exist in the direction of winds coming into Alaska. Richard also looked at Barrow's upper level wind direction as it related to Autumnal warming along the North Slope. This is a complementary post to those articles.

Most of Alaska has seen substantial surface warming in the winter months during the last few decades. The warmth has been well documented in numerous books, articles, and reports. The cause of this increase in warmth is multifaceted and is not the subject of this analysis. One of the frequent responses to observed temperature increases is to question station siting and the effects of urbanization and landcover changes. One way to see if the observed surface temperature increase is a "real" or an artifact of the measurement technique is to look at air temperatures recorded from weather balloons (RAOBs) just above the surface. This blog posts looks at the case of Anchorage, Alaska, and whether the surface temperature increase corresponds to a free-air temperature increase. I know that this blog generally focuses on interior conditions but since the data were handy for Anchorage and since the effects are fairly uniform over large areas, it seems appropriate to go with Southcentral data in this case. I will look at Fairbanks data as time permits.

An inspection of annual temperatures in Anchorage (see Figure 1) shows an obvious increase over the course of the climate record. It is worth remembering that the temperatures since 1953 represents the Anchorage International Airport location and before 1953 it represents a combination of Merrill Field, the Park Strip, and Ship Creek locations. Note the shift in temperature regime in the mid-1970s. 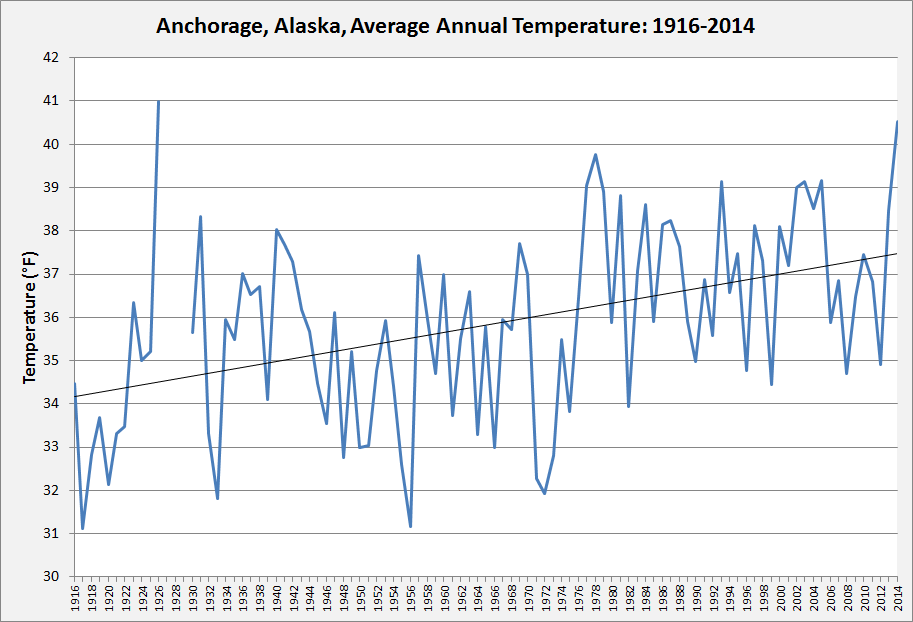 Figure 1. Annual temperature in Anchorage, Alaska, from 1916 to 2014. Several years in the 1920s has too many missing observations for inclusion.

Since temperatures are much more variable in winter than in summer, annual swings in temperatures are often reflected in the temperatures during the cold months of the year. For example, December or January can be +/- 15°F compared to normal but July or August cannot be more than about  5°F from normal. Figure 2 shows the December-January temperature in Anchorage for the length of the climate record. Note the high degree of correlation between the lines in Figure 1 and Figure 2. 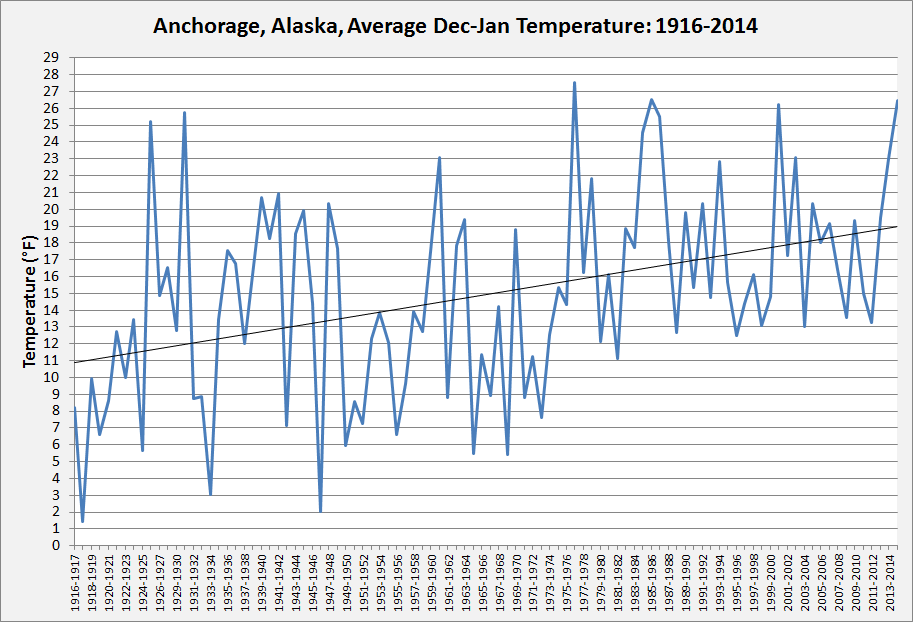 If we use standard 30-year periods to calculate long-term normals, as NCDC and WMO does, the difference in temperatures over time is readily apparent. Figure 3 shows all 30-year daily normals since the 1921-1950 time period. The large increase in winter temperatures are clearly evident. 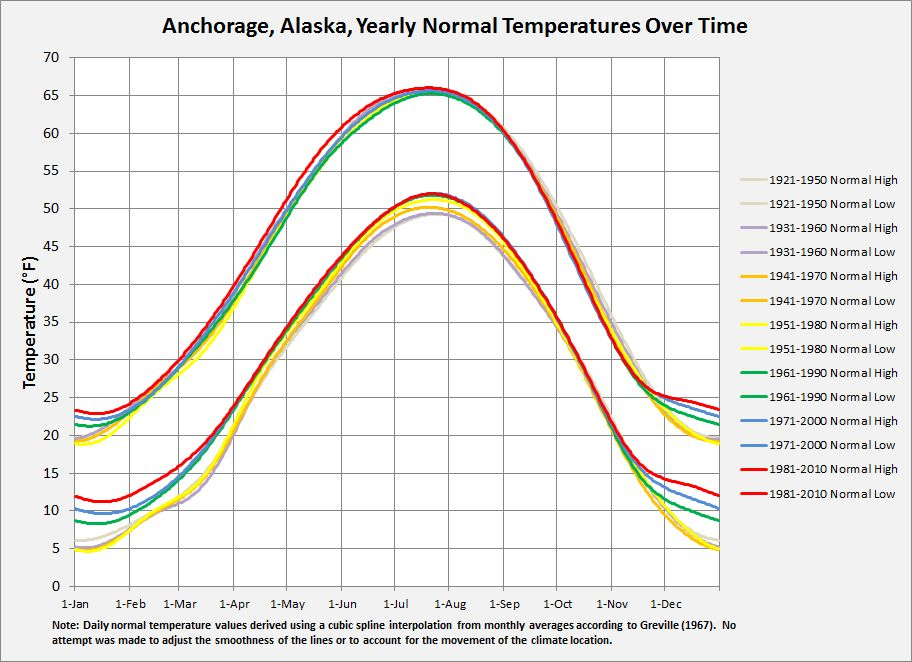 Figure 3. Daily normal temperature for Anchorage for all 30-year periods beginning with the 1921-1950 time period. 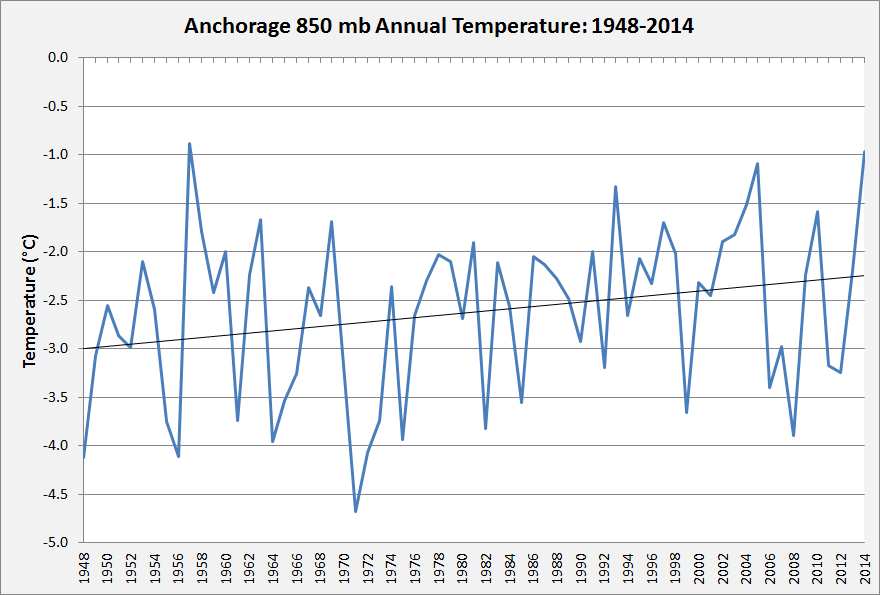 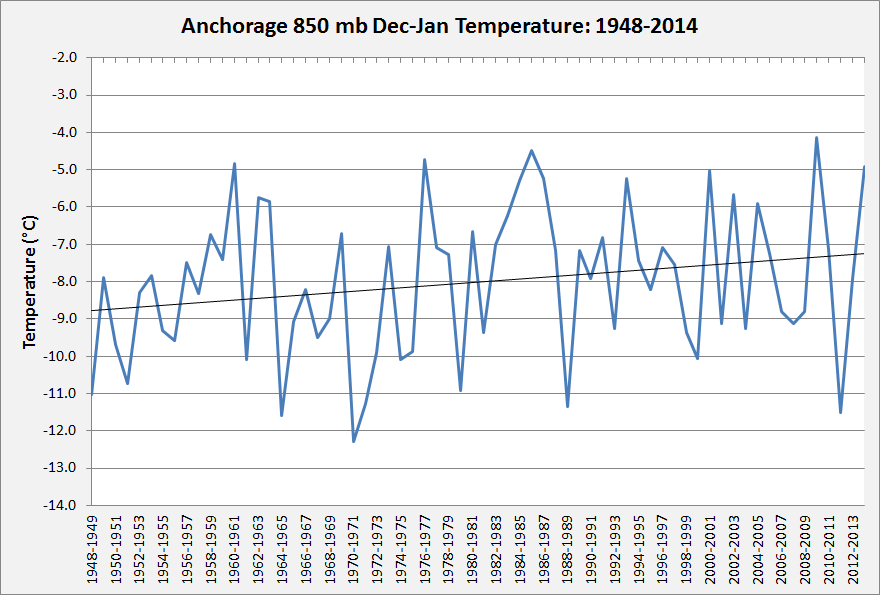 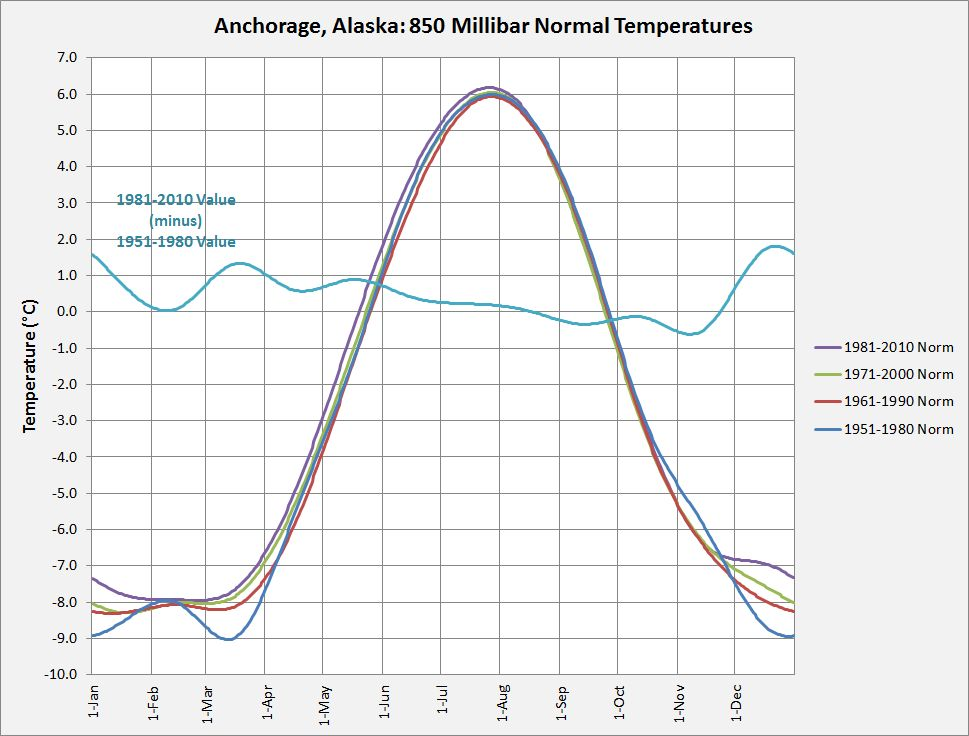 Figure 6. Daily normal temperature for Anchorage at 850 mb for all 30-year periods beginning with the 1951-1980 time period.

The Role of Wind

When the airmass south of Alaska is advected northward from the sub-tropics, warm conditions ensue. Indeed, this winter has seen a never ending stream of warm air from the central North Pacific Ocean move into Alaska bringing warm air with it. Is this the case for all warm winters? The reason we spent so long introducing the upper air conditions in the previous section is because an airmass moving from the south to the north is often not apparent in the surface wind observations – but it clearly shows up in the 850 mb wind observation. Therefore, let us take a look at how the winds at 850 mb blow during warm or cold years. 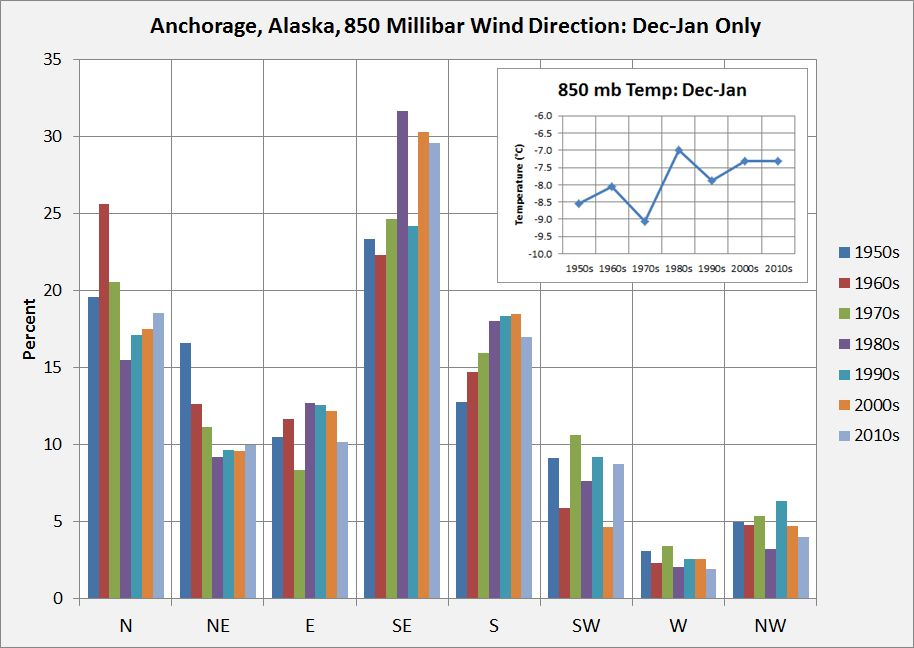 Figure 7 shows the cardinal wind direction by decade for the Anchorage balloon station at 850 mb for only the months of December and January. Since those two months showed the most dramatic surface and 850 mb warming, it is entirely possible that southerly winds might be correlated with the increase in winter temperatures. The chart shows a notable increase in southeasterly and southerly winds at 850 mb over time. There is a corresponding drop in the amount of time with northerly and northeasterly winds during these two months. The R-square value between 850 mb temp and the percentage of 850 mb southeasterly winds by decade (Figure 7) is 0.64. Therefore, we can conclude that a fair amount of the upper air warming during the winter months is due to an increase in southerly winds which advect warmer air from lower latitudes. 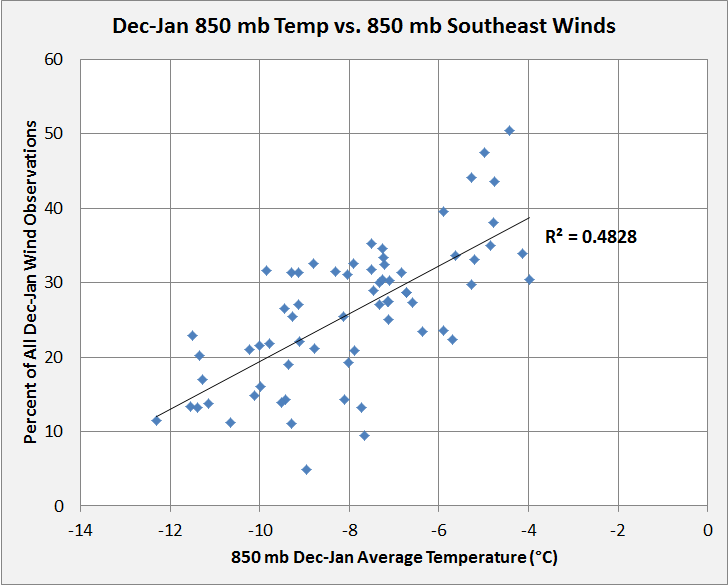 Looking at individual seasons instead of decades, the relationship between wind direction and 850 mb temperatures in December and January is easier to see. Figure 8 shows a scatter plot of December-January 850 mb temps and the percentage of observations with southeasterly winds. The R-square correlation is still very high. Similarly, there is a strong negative correlation between 850 mb temperatures and the percentage of time winds are coming from the north. Figure 9 displays the strength of this correlation. There is a clearly defined relationship between warm winter temperatures in Anchorage (at the surface and at 850 mb) and the prevailing wind direction. This should not come as a surprise to anyone. Air from south of Alaska is obviously warmer than air from north of Alaska. 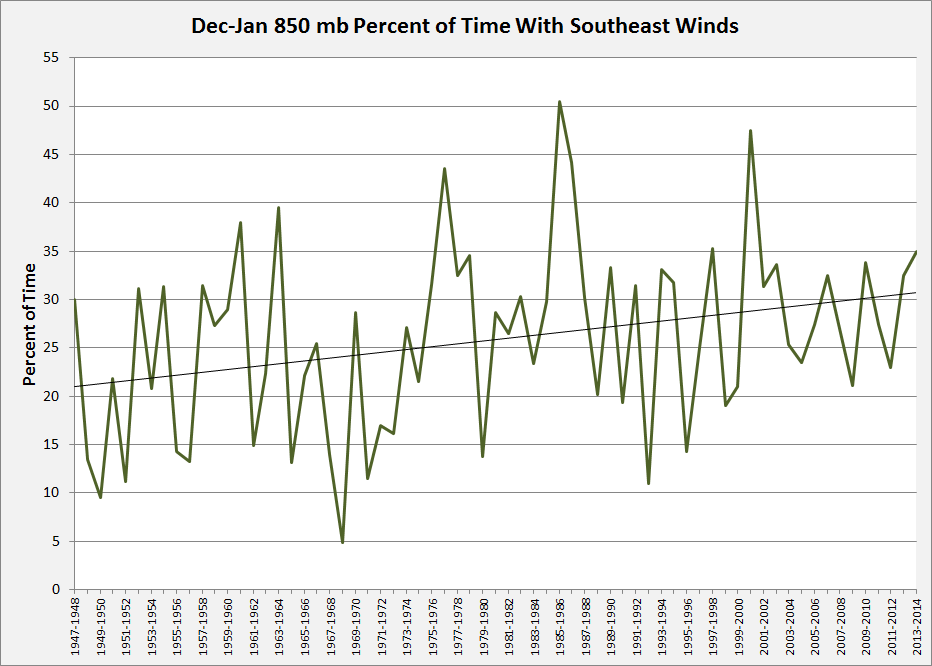 Figure 10. Percentage of December-January 850 mb wind observations from the southeast at Anchorage, Alaska..

What is surprising is the increased frequency of 850 mb winds originating from the south and southeast. Figure 10 shows the long-term trend of the percentage of 850 mb observations with a southeast wind. The question becomes why? The answer to why is not so easy. Southeast winds at 850 mb imply a low pressure center in the Gulf of Alaska. Are Gulf lows becoming more common? Are they becoming more intense? One of the more talked about climate drivers in Alaska is the Pacific Decadal Oscillation. Using University of Washington data, we can show that years with positive PDO values indeed have a larger percentage of 850 millibar southeast wind observations. 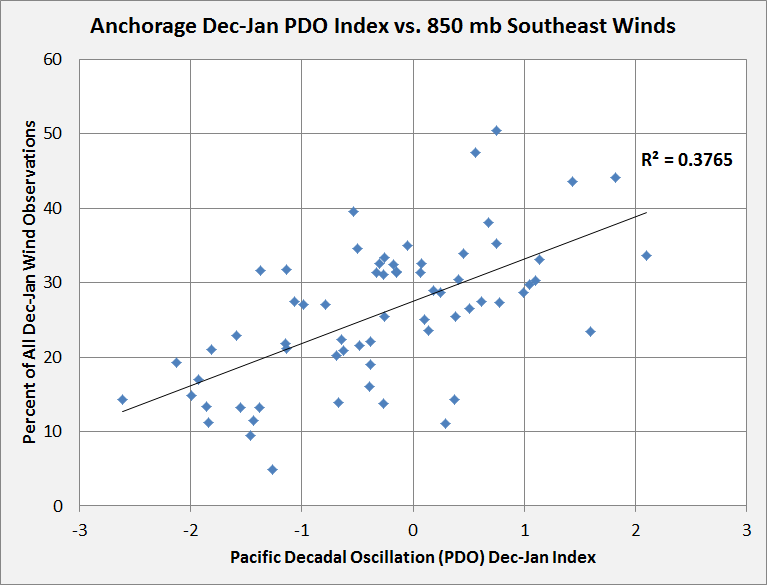 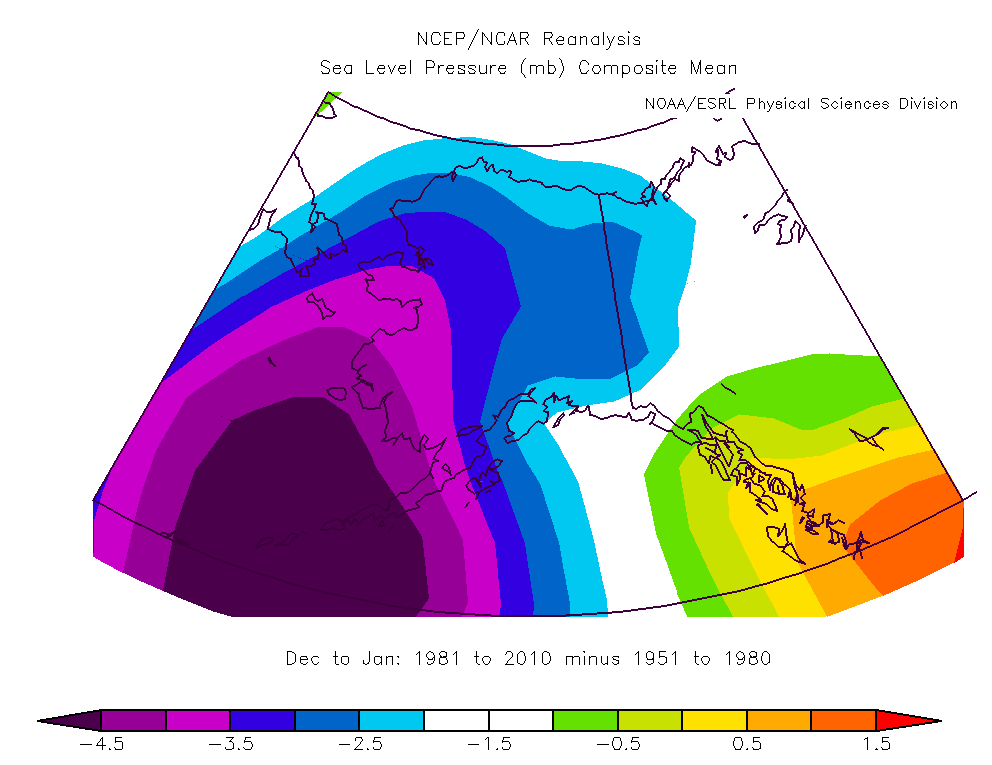 How does all of this affect air pressure patterns? Since the pressure-gradient force drives winds, the air pressure regime should tell us a lot about the wind magnitude and direction. Figure 12 clearly shows that air pressure has been lower in the Bering Sea and the Aleutian Islands during the more recent 30-year normal period. This confirms the hypothesis that lower pressures are more frequent or more intense in a geographical position that promotes southerly air flow. Still, this does not answer the why question. Does the decrease in sea ice affect the pressure patterns? What about the Pacific Decadal Oscillation? This is obvious a question of great importance to Alaskans and an active area of research. 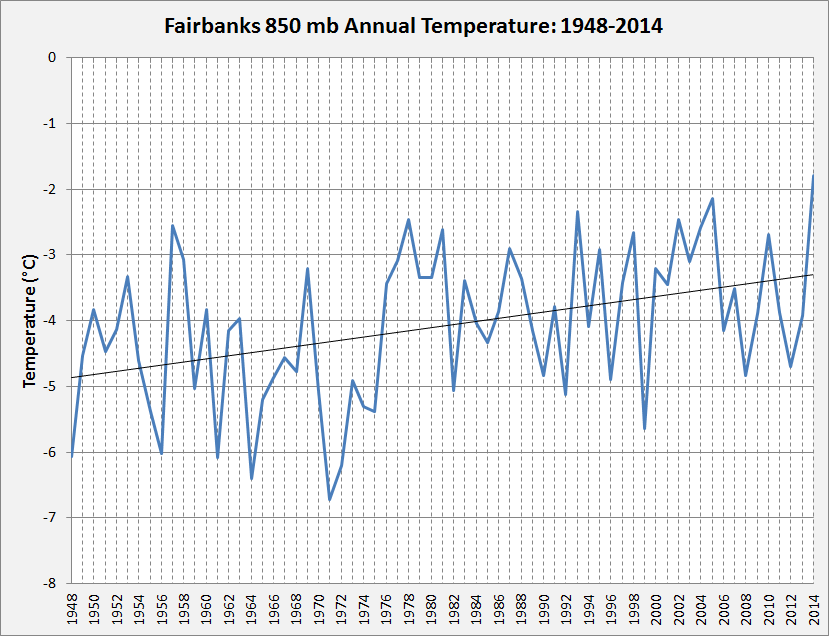 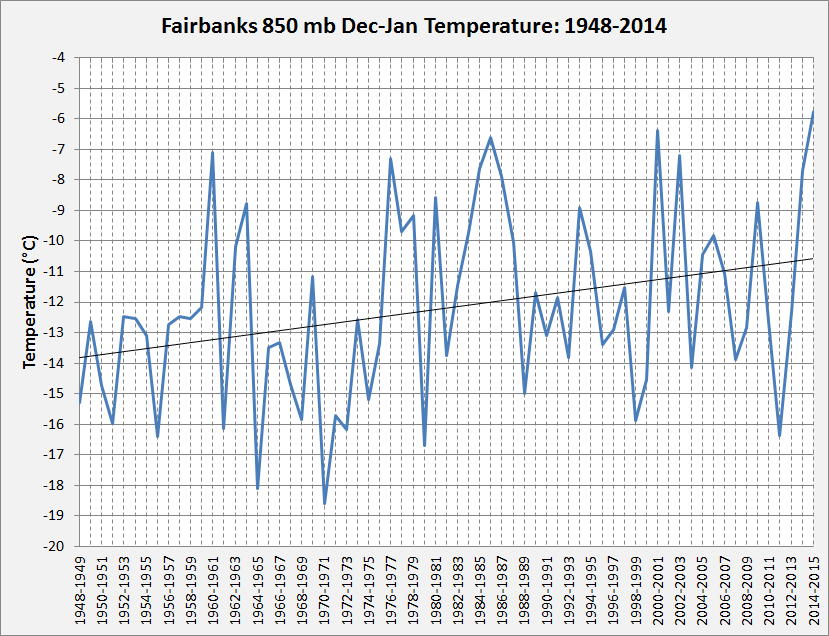 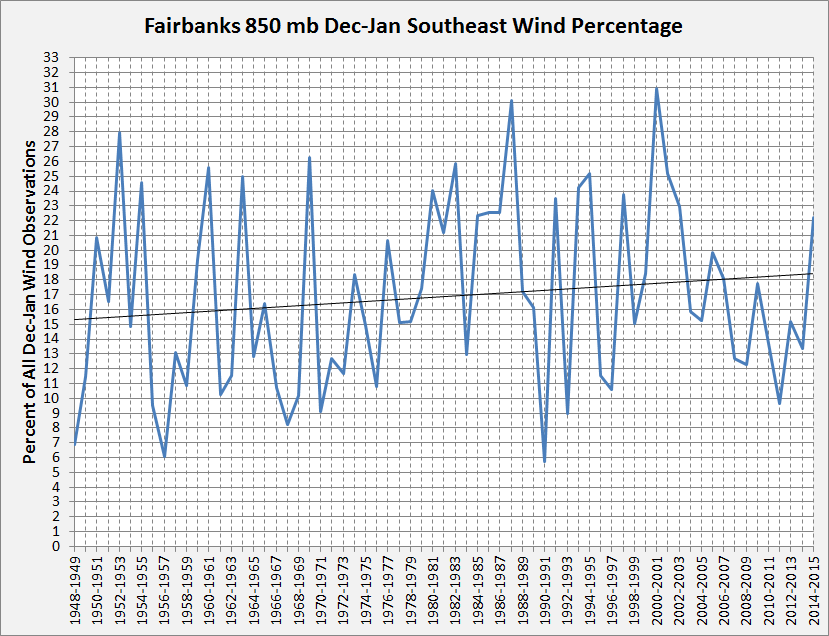 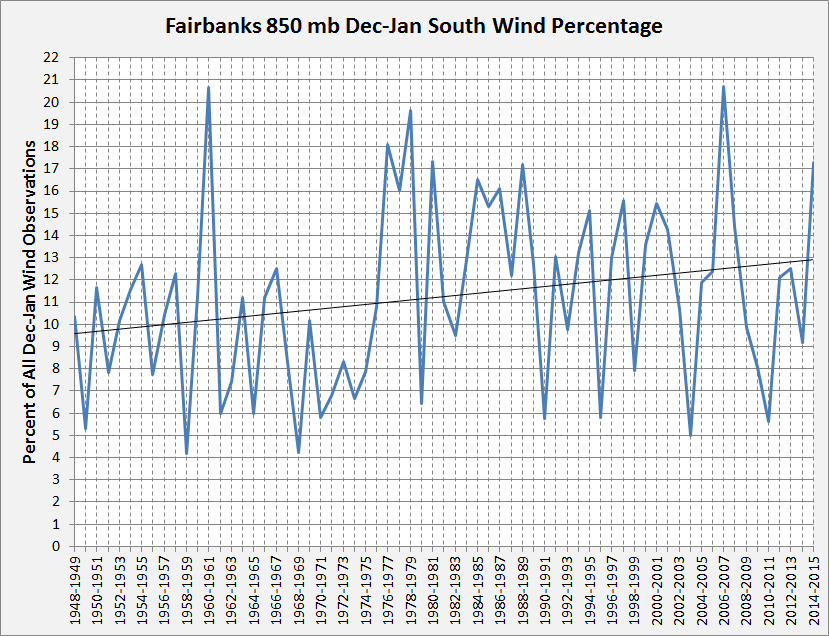 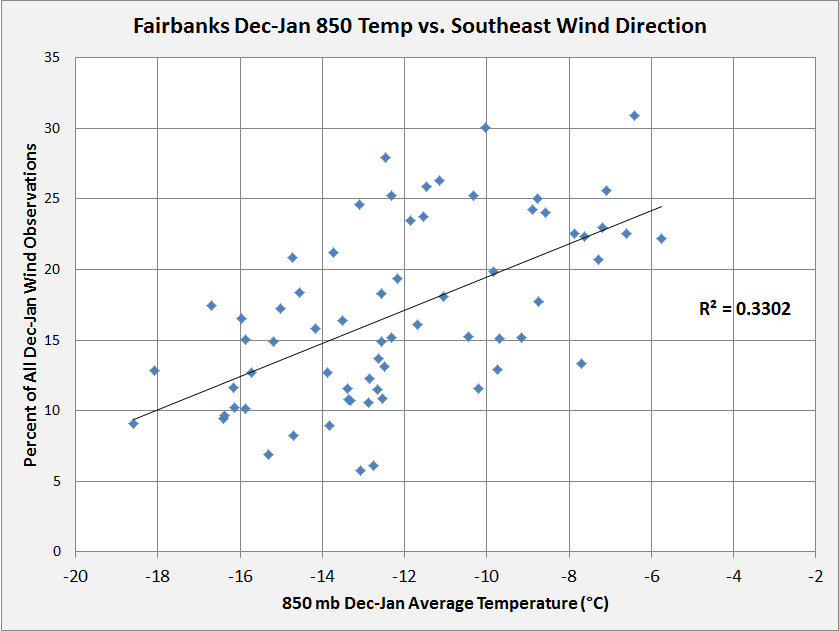 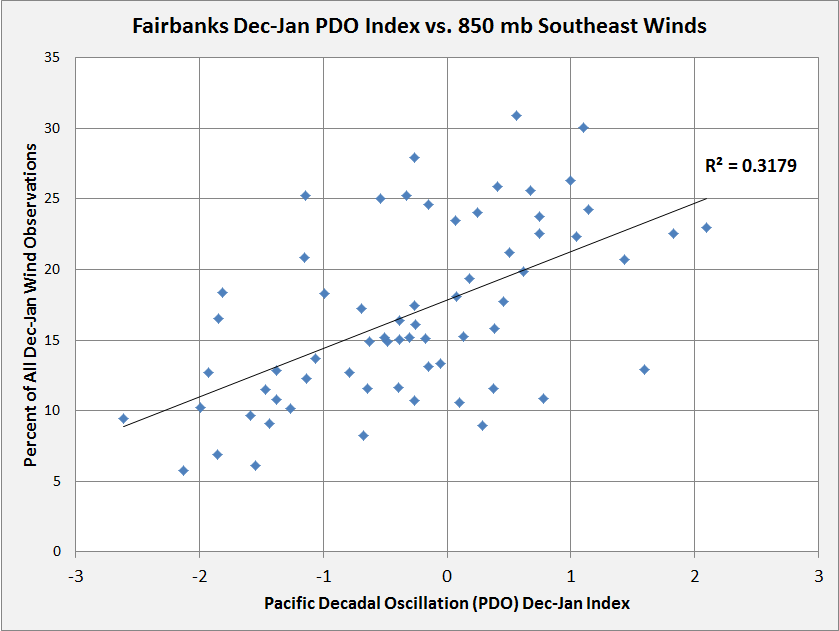 Figure S6. Scatter plot showing December-January Pacific Decadal Oscillation (PDO) index values with the percentage of time December-January 850 mb winds are from the southeast at Fairbanks, Alaska.
Posted by Climatologist49 at 9:21 AM