The mean temperature in Fairbanks since November 1 has now moved into first place in the historical rankings since 1930; in other words, if we define winter as November-March, then this is now the warmest winter on record through January 17.  The winter-to-date temperature now exceeds that of 2002-2003 by the slimmest of margins.

The chart below shows the evolution of the winter-to-date mean temperature this year in red, compared to 2002-3 in blue and the historical range in gray.  This winter has been steadily climbing through the rankings as warmth at the surface has become increasingly anomalous.  We can see that mean daily temperatures close to +10 °F would be required to maintain first position for the remainder of winter; this would be more than 15 °F above normal for late January, so it will be a challenge to hold onto the record in the near-term.  In fact, we're very likely to fall back out of first place in the coming days, as January 2003 had a very warm spell around the 20th. 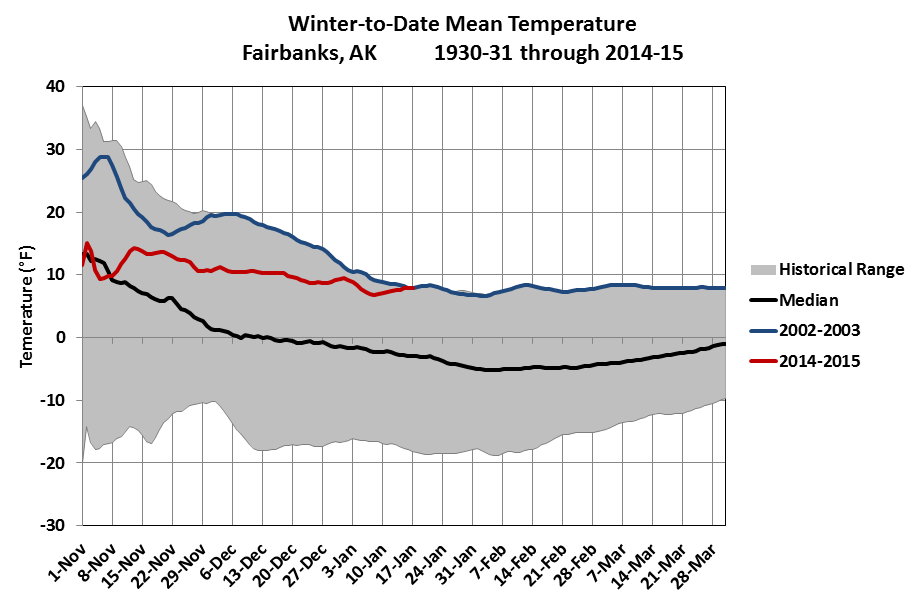 [Update: Brian coincidentally made a similar graphic, and his analysis shows that the winter of 1928-29 was warmer through January 17.  This is helpful context for the current warmth.  It's a matter of personal preference as to whether to include pre-1930 data in this kind of analysis - I usually don't do so, because the Weather Bureau/NWS era began in December 1929 and I have greater confidence in the quality of the Fairbanks data since then.  Rick Thoman went so far as to say that pre-1930 data from Fairbanks are "plagued by data quality issues", although this may apply more to pre-1920 data.  My own (relatively uninformed) opinion is that there's very useful information to be gleaned from the early years, but the data should be used with caution.]

Posted by Richard James at 5:01 AM