Low Snow in the Northwest

One of the many notable climate anomalies in Alaska this winter is a lack of snowfall in many locations, and even Kotzebue in the northwest is suffering in this regard.  So far this winter, only 8.1 inches has fallen in Kotzebue, and the snow depth has been stuck at a meager 2 inches since November 27, after peaking earlier at 4 inches.

The only other winter with such a low snow depth in January was 2012-2013; that winter saw an even more extreme snow drought in the early going, but the snow depth then reached 5" on January 12 and 9" on January 15.  So this winter now has the distinction of the lowest peak snow depth through this date.  In a couple of days we'll also break the record for latest date to first reach 6" snow depth (January 14, 2013); the median date is November 17.

Here's a chart of the season-to-date snowfall and peak snow depth since 1949.  (I'm not sure how the snow depth exceeded the snow total in 1994-95 and 1999-2000, but that's what the data say.)  It's interesting to note the high volatility in snow totals in recent decades and especially in the last 5 years or so. 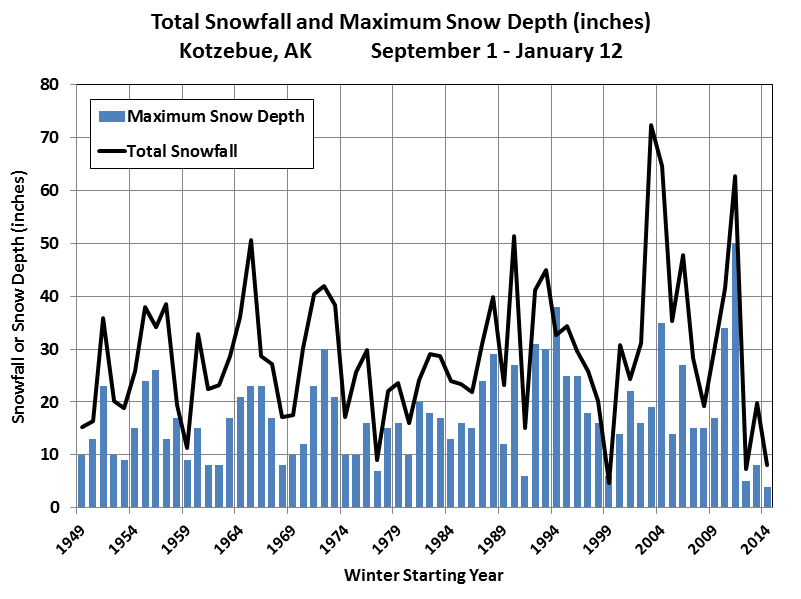 Why the lack of snow?  The answer is that a blocking ridge over the Arctic Ocean north of Alaska has prevented cyclonic storm systems from reaching Kotzebue.  The six maps below show the sea-level pressure anomaly (left column) and 500 mb height anomaly (right column) in October, November, and December of 2014; notice the general lack of low pressure in the north.


The recent flow pattern can be contrasted with the situation in a very snowy month: below are the maps for the snowiest early winter month in Kotzebue's history, November 2003 (46 inches):
It's interesting to note that Nome is not doing too badly for snow this winter, with 27.1" season-to-date and a current snow depth of 11".  Seasonal snowfall totals are correlated at only +0.42 between Kotzebue and Nome, so this isn't too surprising; but it does appear that Nome has done fairly well out of an unfavorable upper-air pattern.
Posted by Richard James at 5:43 PM