Temperatures the past month in Fairbanks have been on a bit of a roller coaster, as Richard has previously blogged about. And, as sometimes happens this time of year, snow cover has been quite variable, with very little snow at valley level but several rounds of accumulating snow above 1500' elevation. Combined with the rapidly decreasing solar heating, this makes for, at times, significantly greater differences in daily maximum temperature between the valley and hills than would be expected from that accounted for by differences in elevation.

Below is a plot (upper portion of the plot) of the daily highs since mid-September at Fairbanks Airport (434' MSL) and Keystone Ridge (1600' MSL). The high temperatures are the calendar day (AKST) max temperatures, so this is a direct apples-to-apples comparison. On the lower portion I've plotted the difference in max temperatures (blue) and the late evening snow depth at Keystone Ridge (Fairbanks Airport has had no days with measurable snow on that ground overnight). While not all days with big differences in max temperature are associated with measurable snow remaining, it is the case that the days with  differences less than 5 degrees have only occurred when no measurable snow was on the ground at Keystone Ridge. So clearly, snow cover isn't everything. Much of the difference is attributable to Keystone Ridge's northeast exposure, which greatly amplifies the lowering sun (solar noon solar elevation today, October 13th is 17º) 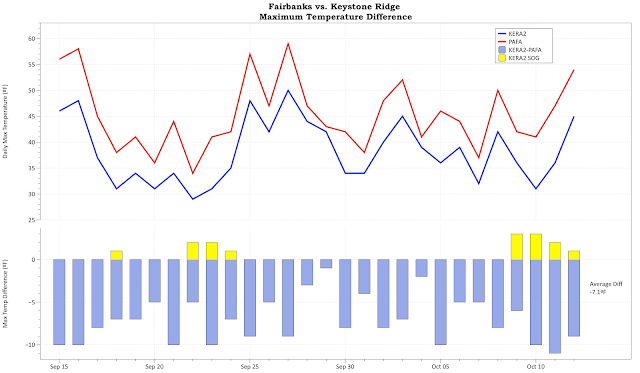