The unseasonable warmth across Alaska is breaking records for the time of year in many locations, particularly in terms of daily minimum temperatures.  Here are a few locations at which the daily low temperatures have been the highest on record for so late in the autumn:

Perhaps most impressive of all is Eagle, where yesterday's low temperature came in at 44 °F at the airport.  The COOP observation appears to not be available yet, but the previous record for warmest this late in the season at either site is 38 °F.  [5 pm update: the COOP low temperature was 41 °F]

Arctic Canada is getting in on the action too: Fort McPherson reported a temperature of 53 °F yesterday.  The previous warmest for this late was 50 °F, in a period of record (with some gaps) back to 1893.

Needless to say, warmth and rain are eating up the snow cover even in the lower elevations of the Brooks Range.  Here's this morning's FAA webcam photo from Anaktuvuk Pass, elevation 2171' and a remarkable 43 °F overnight: 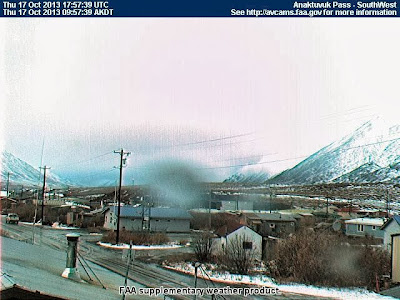