Most of interior Alaska is now approaching the date at which the climatological average temperature drops most rapidly.  At most interior stations, the peak rate of climatological cooling is about 5-7 °F per week, or up to 1 °F per day.  The map below shows the maximum weekly rate of cooling at each station included in the 1981-2010 daily normals from NCDC.  Based on this data, the COOP station in Woodsmoke has the distinction of the most rapid cooling of any station, at 7.1 °F per week between October 15 and 27.  Woodsmoke is the only station with a weekly cooling of 7 °F or more.  The Aleutian town of Adak, with its extremely maritime climate, has the least rapid peak cooling. 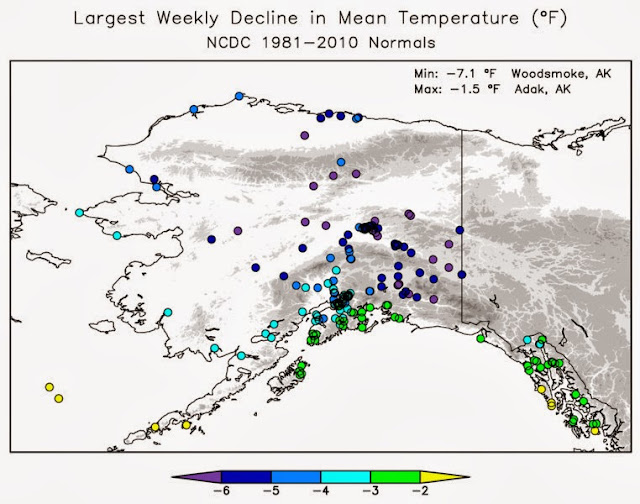 The second map, below, shows the spatial distribution of the date of most rapid cooling; the colors indicate the starting date of the week with peak cooling.  It's interesting to note that in general, the date of most rapid cooling progresses eastward across the state, with most western stations seeing the most rapid seasonal change in early October, while the southeastern interior sees peak cooling in the second half of the month.  I expected to see the peak cooling occur later in the year along the west coast, because of the maritime influence, but in fact it's the other way around: in the more continental locations, there is nothing to keep the temperature from accelerating downward as the sun's strength diminishes.  At least, that's how I interpret the data. 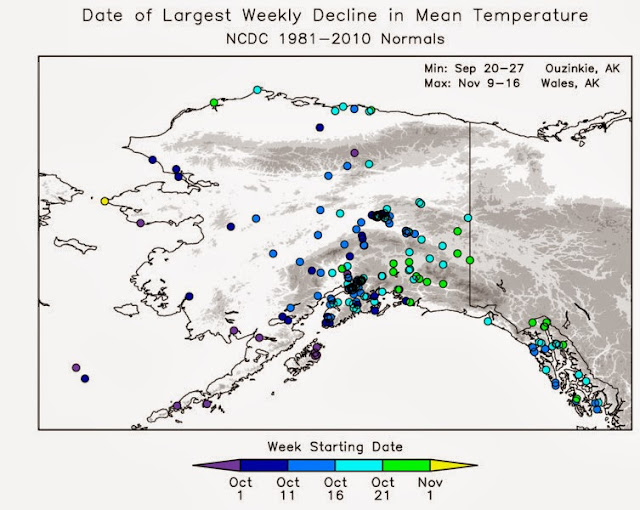 As a point of comparison, it's fun to note that Oymyakon, the notorious pole of cold in Siberia, sees its average temperature drop by 9.4 °F in the week beginning October 18.  The average daily mean drops from 24.6 °F on October 1 to -15.3 °F on November 1... 40 degrees in one month.  Alaska's top competitor in the same period is, again, Woodsmoke, with a drop of 28.1 °F.