* Updated at bottom for clarity

Last week a discussion erupted regarding the calculation of average temperatures. Here is a little light reading on an example from down in Anchorage. The Anchorage forecast office is the official site where climate observations are made for the state's largest city. There is a thermometer on the site that publishes temperatures every 10 minutes. Some PAFC staff have indicated to me that it represents the official temperature but Rick has indicated that might not be the case. If we assume that it is, we can compare an average of the 144 daily readings with the official min plus max divided by two method for calculating average temps. For about 18 months I save the 10-minute readings for the PAFC site and put them into an Excel file. In June 2009 the web functionality changed any it only allowed the user to go back a few days before the data was purged.

The charts below show the daily difference between the 10-minute mean and the official daily mean. Over 90% of the time the two numbers were within 1 degree of each other. In the warm months, the 10-minute readings were typically larger than the official daily average. (*Update: the black line is a 10-day running mean). That is primarily due to a quick spike in temperatures at the official site late in the afternoon that pushed the official high upward for only a brief period. In the cold months, the pattern was much more chaotic and the magnitude was surprisingly smaller. 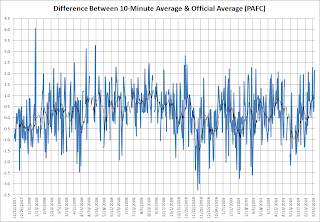 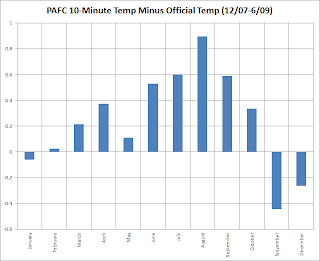 * Update: Here is an example of a single day's temperature profile. On 2/4/2008, the official high was +2 and the official low was -12. The strict arithmetic average of those numbers yields an average -5°F. What I am interested in knowing is exactly how representative this average temperature is as a proxy for the temperature at a much finer temporal resolution. Since there are 144 measurements throughout the day, we can compute an average in much greater detail. On this date, the average of the 144 measurements was -6.17°F. In my opinion, that is actually really good when compared to the simple high+low/2 method. 65% of the 10-minute observations were below the average but the short, intense peak nearly balanced the prolonged cold temperatures nearly perfectly. Over the course of the year, this value is pretty representative. In summer it is greater and in winter it is smaller. Hope that helps. 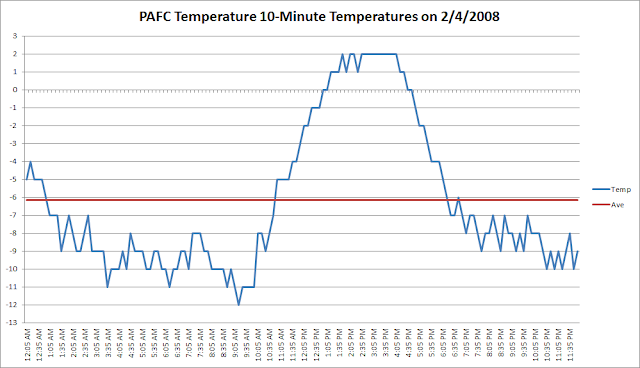