Reader Eric asked recently about the rate of breaking weather records in Fairbanks, and specifically whether the pace of record-breaking has picked up in the past several years.  The official weather records in Fairbanks date back to observations taken in the early part of the 20th century, but with various site changes involved in the earlier years I decided to look only at the GHCN data for Fairbanks airport since 1949.  The series of charts below shows the annual number of records, either broken or tied, relative to the 1949-2013 history, for several temperature and precipitation variables. 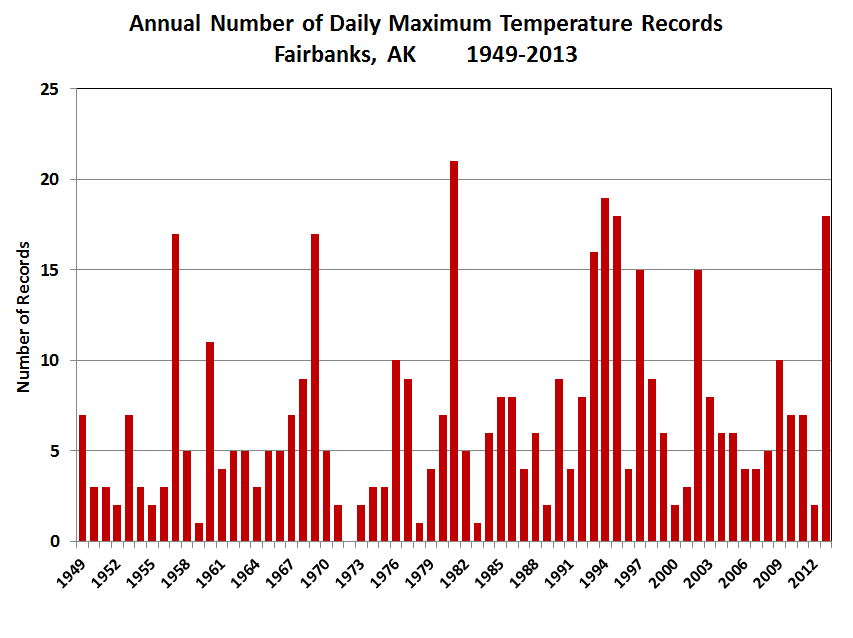 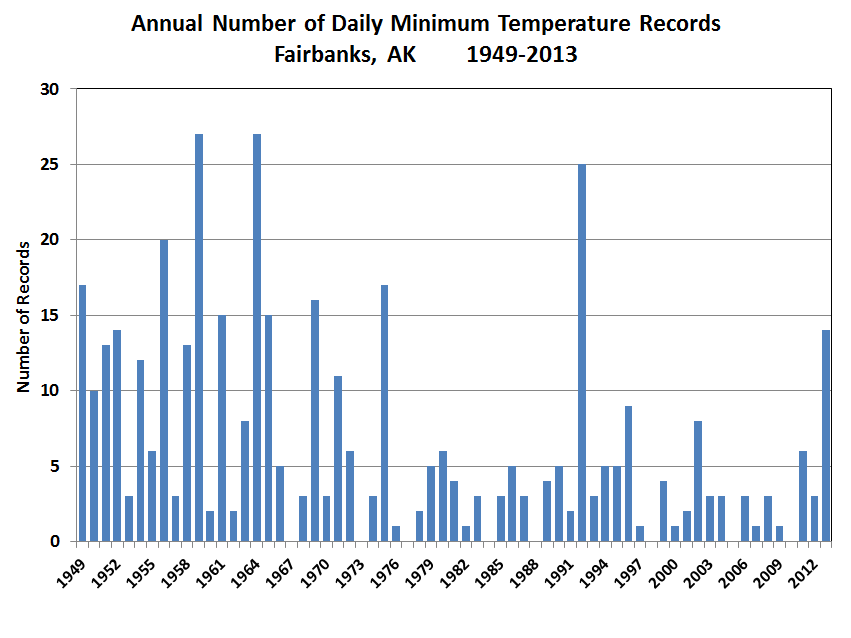 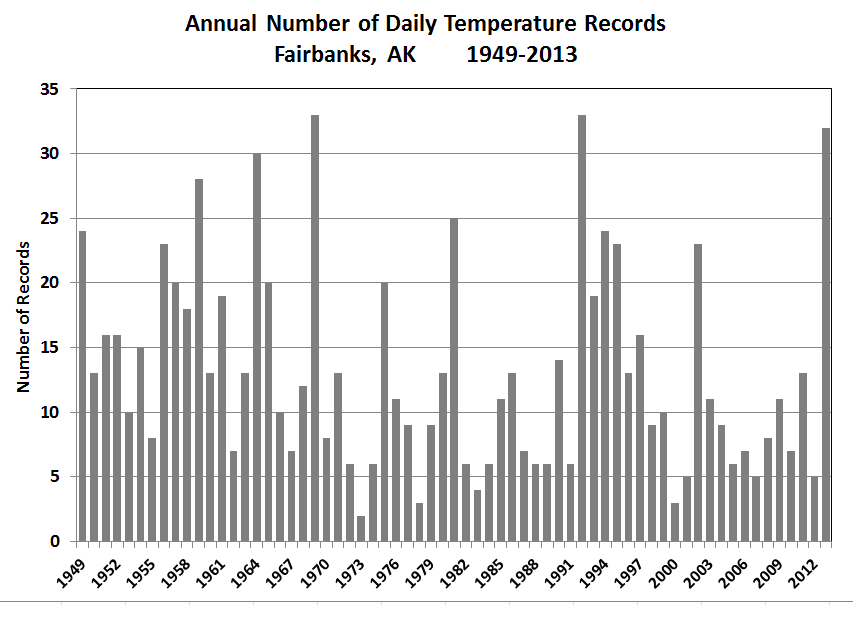 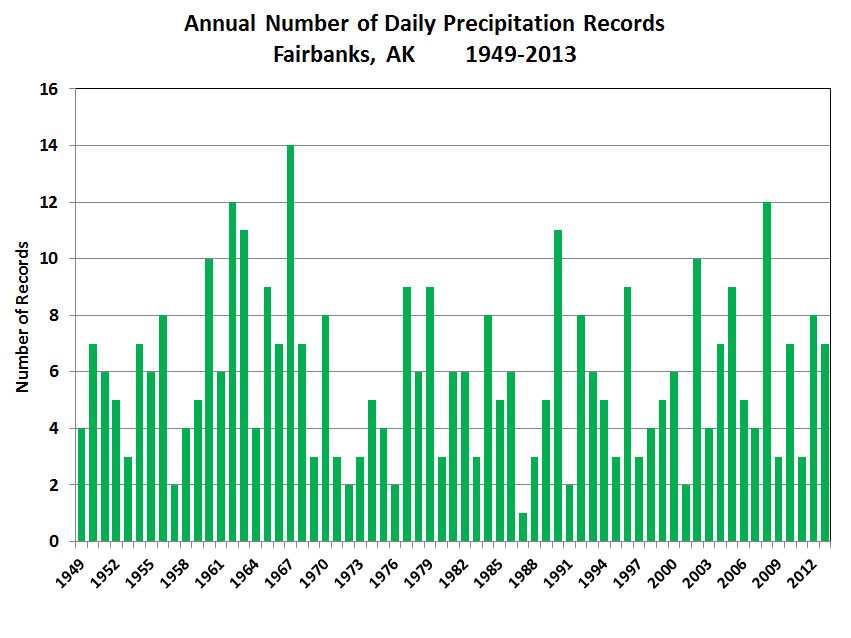 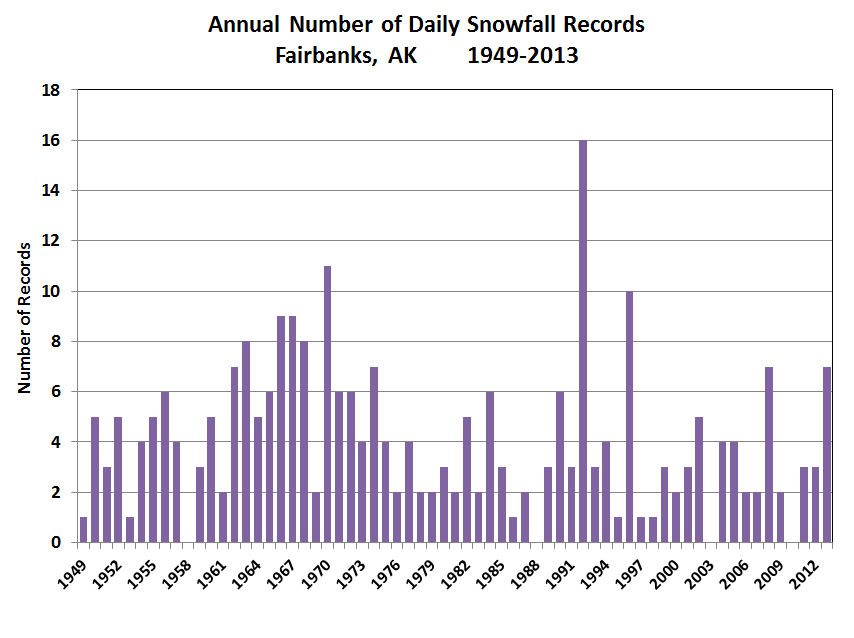 Finally, I also looked at the records for monthly mean temperature and monthly total precipitation and snowfall; see the charts below.  Again the temperature records are the most interesting, with a cluster of record warm months from 1975-1981 and none prior to 1975.  Two monthly temperature records were broken in 2013 (cold April, warm October); 1979 was the only other year with both a record warm month and a record cold month.  For snowfall, the period 1991-1995 saw record snowfall for 5 of the 10 months, although the 1995 record was for the only August snowfall in the history (0.1 inches).

In conclusion, 2013 was certainly an extreme year for breaking temperature records, and was a little more extreme than "usual" for precipitation and snowfall; but other years of the past decade do not stand out as especially unusual. 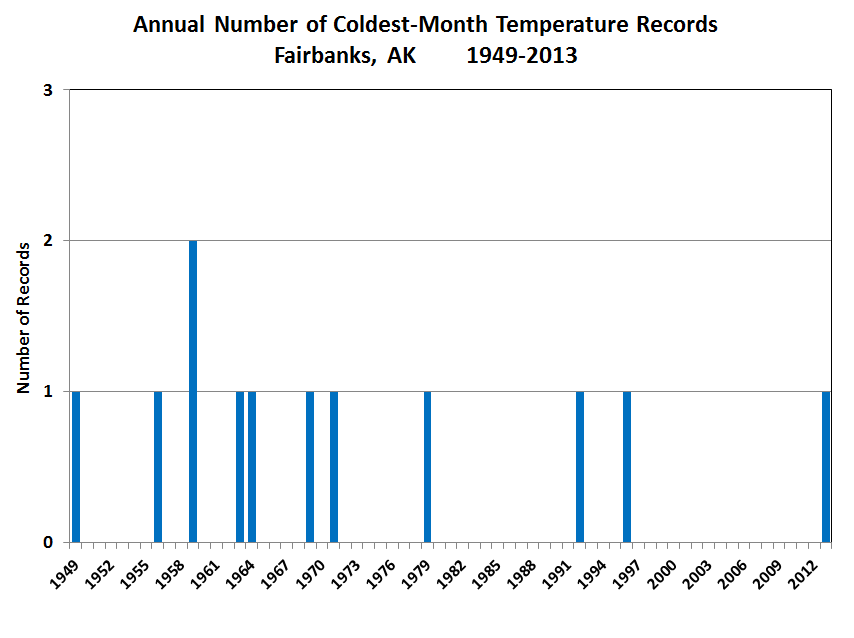 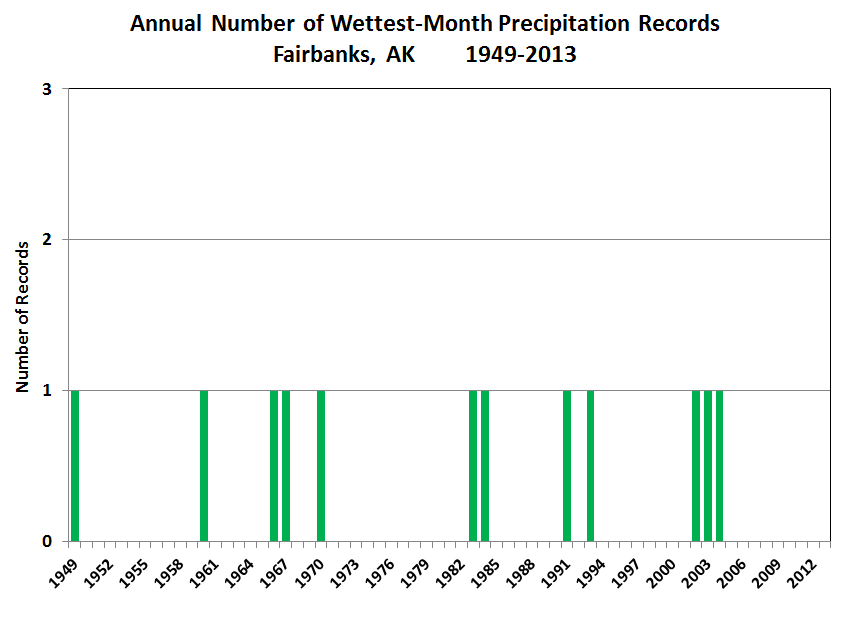 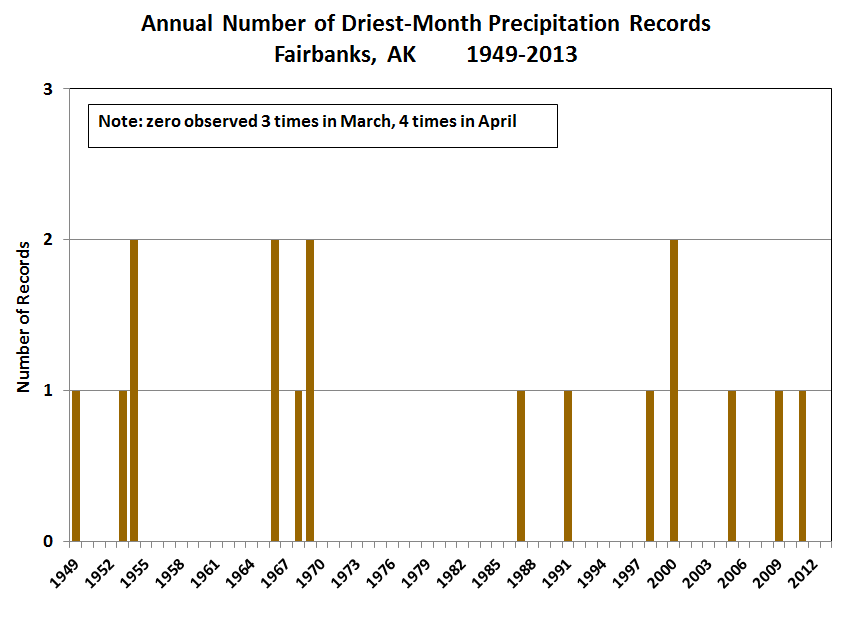 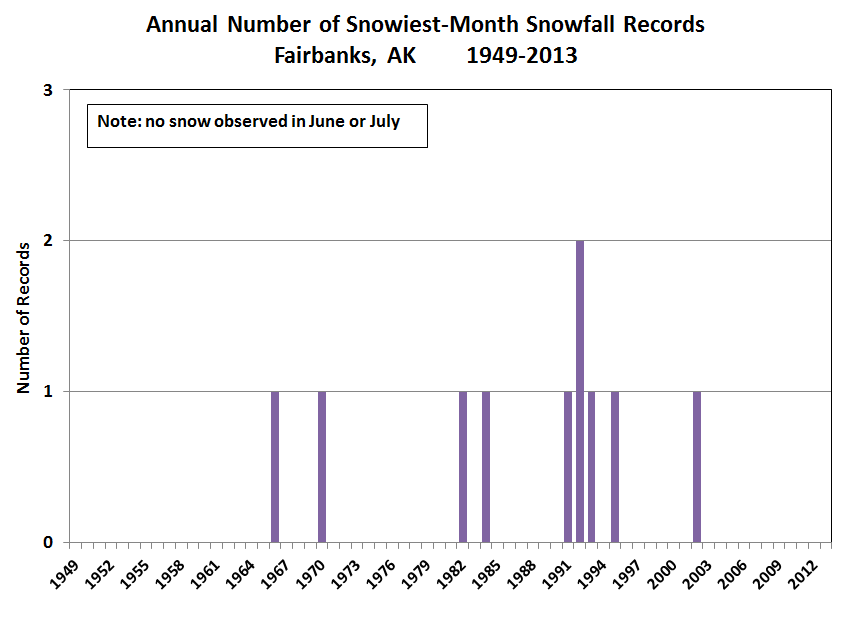 Update July 9: I've added charts below for the daily low maximum records and high minimum records, as well as the total of all four daily temperature record types.  1992 really stands out here for the low maxima, and 2013 tied with 1981 for most high minimum records.  In all four categories combined, 2013 was second only to 1992 in terms of the number of temperature records.  However, 2013 was very unremarkable in terms of the number of low maximum records. 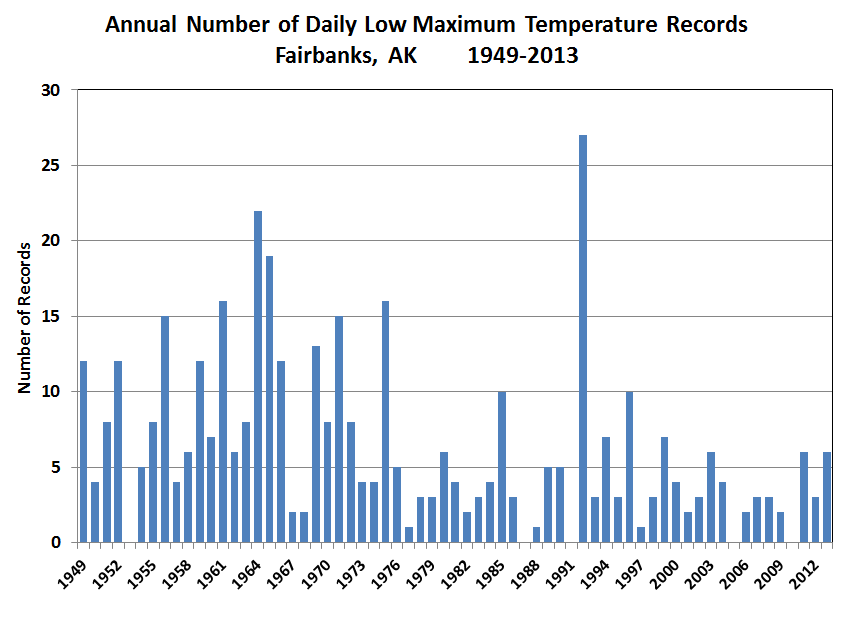 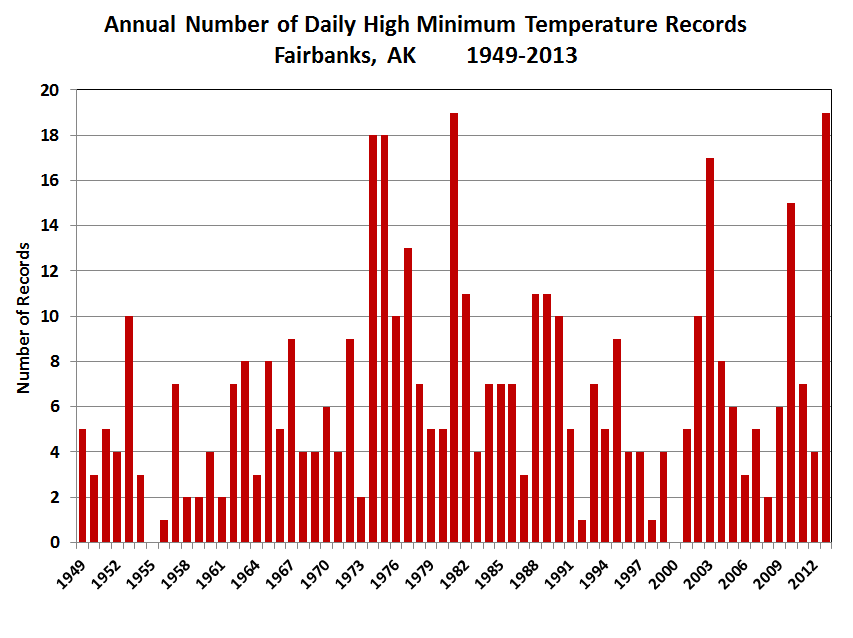 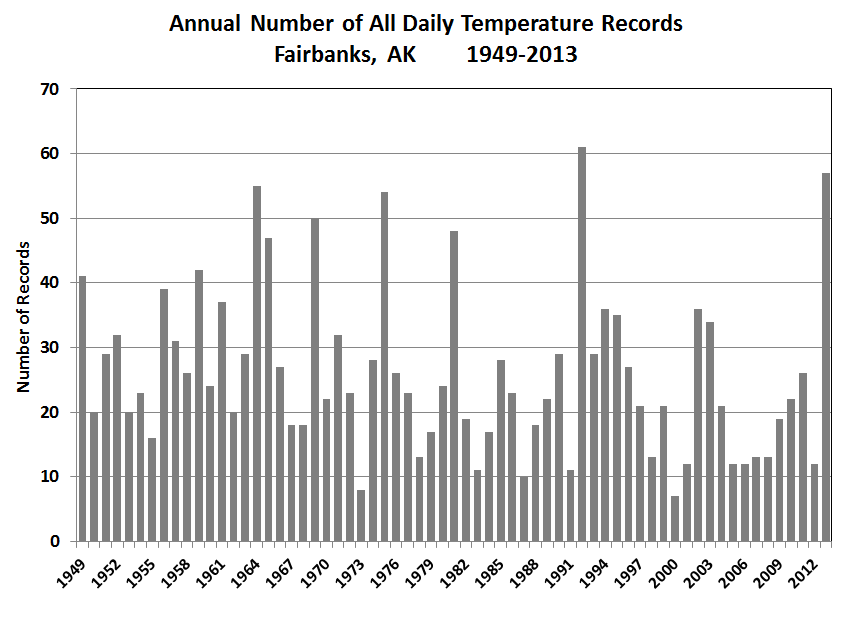