It won't have escaped anyone's notice that temperatures are dropping fast across interior and northern Alaska (especially after the mixed rain and snow in Fairbanks today).  Bettles recorded their first freezing degree days of the winter yesterday (daily mean temperature below freezing), which is just about on schedule for the time of year.  However, the low temperature was 14 °F, and it's still a little early for that kind of chill.  Up at Barrow, yesterday was the first day that the temperature failed to rise above freezing; this is later than normal, as we would expect with the reduced ice cover.

The chart below shows the recent daily high and low temperatures from Fairbanks airport, Keystone Ridge, and the secondary airport site (FAUA2).  It's interesting to note that Keystone Ridge has seen the temperature drop below freezing on six nights so far this autumn, but the primary airport site has only had two frosts so far.  Looking at the joint history of observations since 1996, I expected to see that this is unusual, thinking that overnight inversions would typically produce more frost in the valley than on the hill in September.  However, the overall frequency of frost is just about equal in September at the two locations; some years favor more early frost events in the valley, and others, like this year, favor more frost on the hill.  It's not until October and the advent of snow cover that daily low temperatures become significantly lower in the valley (see climatological chart here). 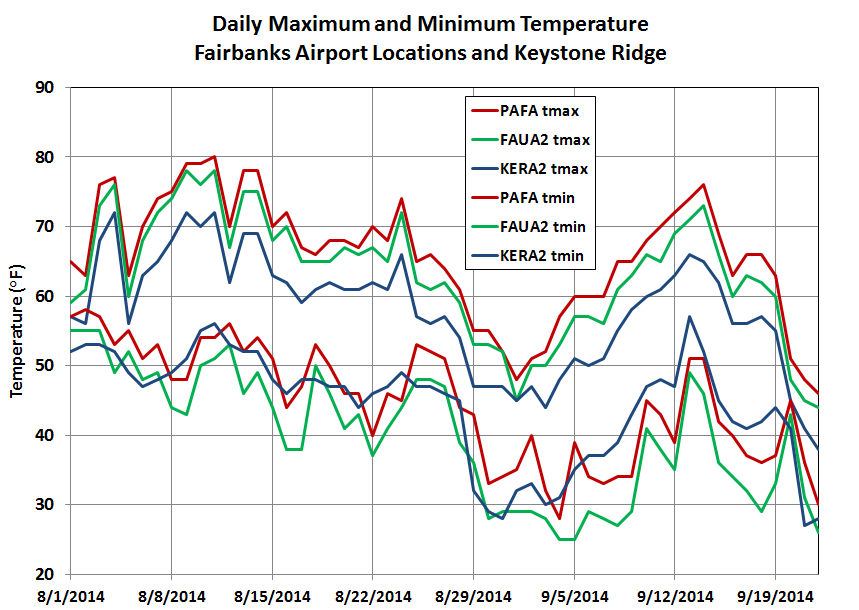 The chart also shows the much cooler temperatures reported from the airport #2 location, where the temperature has dropped below freezing 14 times already this autumn.  We discussed this thermometer's characteristics at some length here, although without arriving at a clear resolution as to whether the #2 temperatures are truly legitimate.  However, Brian showed that the 2000-2013 temperature differences between the two airport sites were largest in the month of September, and so the recent differences are consistent with this fact.