Residents of Fairbanks are well aware of the profound elevation-dependence of temperatures in the cold season, and it's presumably also well-known that heating costs are generally higher in low-lying areas where cold air pools in the winter months.  Hillside residents tend to enjoy lower annual heating costs, and I've been told the differences can be substantial.  As I thought about this recently, I wondered if it would be possible to identify an "optimal" elevation at which heating costs might be minimized.  Obviously, if one moves too high up in the hills, then increased heating costs in the warm season might offset the gain from avoiding the valley inversion in winter.  Note that we ignore the effects of wind speed in the following analysis; higher-elevation locations will tend to have higher wind speeds, which would increase heating costs, perhaps significantly in some locations.

To take an "idealized" look at this, I estimated annual heating degree days (HDDs) from the twice-daily balloon sounding data from Fairbanks airport.  I took the mean daily temperature to be the average of the 3am and 3pm sounding temperatures, and then calculated the daily HDDs (base 65 °F) in the usual manner.  The following chart shows the 1981-2010 mean of the estimated annual degree days, calculated at 10 m elevation increments up to 600 m above sea level.  I also performed the calculation for McGrath, the only other sounding location in interior Alaska. 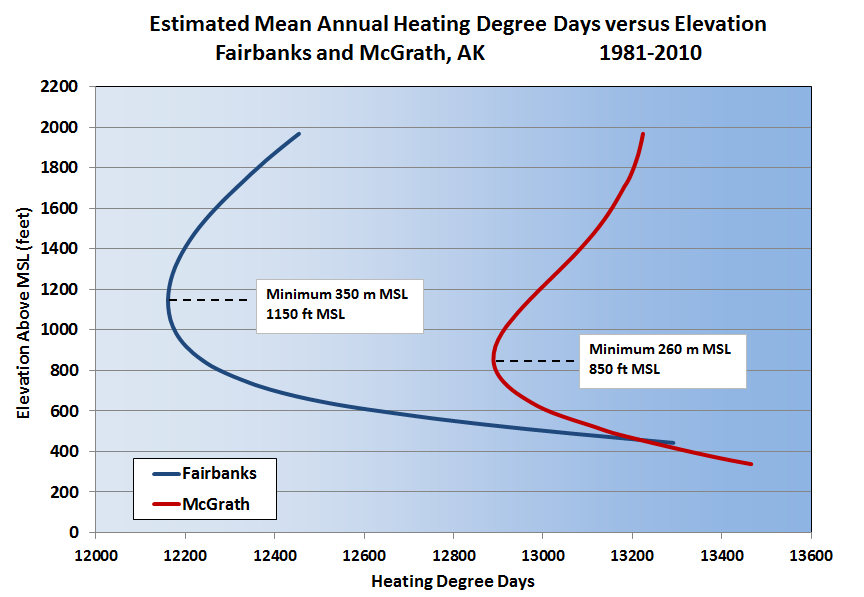 The data confirm that, as expected, there is a climatological minimum in annual HDDs not too far above the ground.  At Fairbanks this minimum is near 350m above sea level, or about 700 feet above the elevation of the airport.  At McGrath the minimum is only about 500 feet above ground, and the temperature difference from the surface to the minimum aloft is much smaller than at Fairbanks.

The second chart, below, shows the HDD profiles for the warm season (May-September) and for deep winter (December-February).  We see that heating needs increase almost from the surface up in the warm season, as there is little inversion in the daily mean temperatures, but in winter the inversion is very deep on average - the warmest temperature in the sounding is above 4000 feet on average, as we showed here. 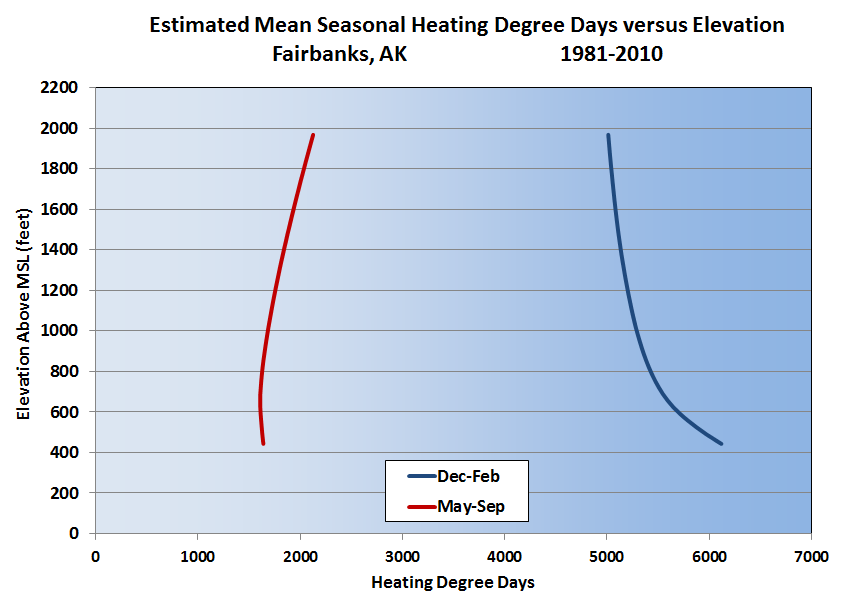 Having looked at the estimated HDDs from the balloon soundings, it's interesting also to examine the observed dependence of HDDs on elevation at Fairbanks-area stations; the chart below shows the NCDC 1981-2010 normal annual HDDs for all available stations within 20 miles of the Fairbanks airport.  There is tremendous variability among the low-elevation stations owing to local patterns of cold air drainage and urban-versus-rural temperature differences; but the basic result shown above is confirmed in the station data: the lowest HDD values are found at moderate elevations near 1000-1500 feet above sea level.  However, we also see that being at a higher elevation is no guarantee of a more benign temperature regime, as sheltered valley locations at higher elevation (e.g. Gilmore Creek) can be just as cold as lower elevation sites. 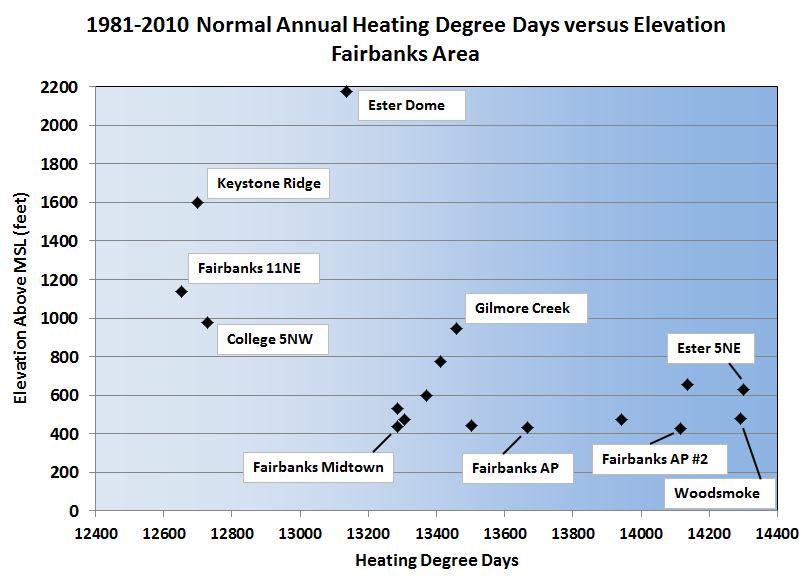