Back in July we had some extended discussion about high daily minimum temperatures in Alaska, so I've been meaning to look at the climatology of "warm nights" in the state.  I use the phrase loosely as the highest daily minima tend to occur when "night" is fleeting or non-existent.  For the purpose of this project, I looked at daily minimum temperatures of 60 °F or above; this is well above the peak summer average minimum temperature for any Alaska location, and so these events are unusual and notable wherever they occur.  In my mind, a 60 °F overnight minimum also marks something of a threshold in terms of comfort level - anything warmer, and summer heat tends to accumulate in buildings.

The first map below shows the average percentage of days in June through August when the daily minimum is at or above 60 °F, based on the 1981-2010 data.  I'm showing only stations with nearly complete data.  Blue "0.0" markers indicate locations where no such events occurred between 1981 and 2010, while green "0.0" markers indicate at least one event but less then 0.1 % of all days.

Some notable aspects of the data include:

- the high frequency at Fairbanks airport, 3.4 %, the highest of any location
- the low frequency at the Eagle COOP station, 0.2 %.
- the relatively high frequency at Kotzebue (1.4 %), which is not only above the Arctic Circle but also adjacent to the cold northern ocean. 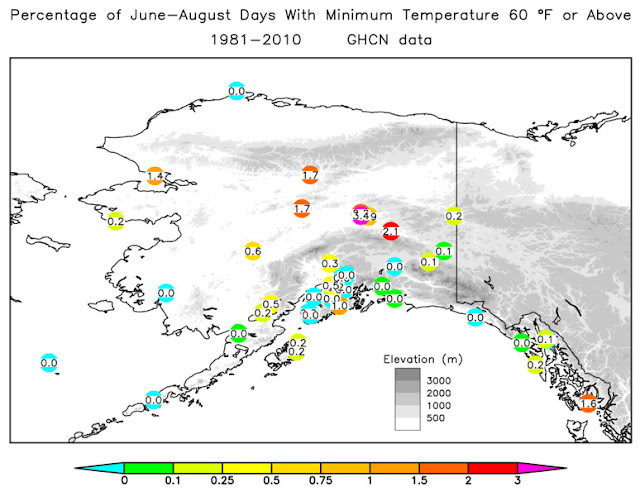 Looking more closely at the situation in the Tanana valley, we see that Fairbanks airport reports "warm nights" much more frequently than other Fairbanks locations: 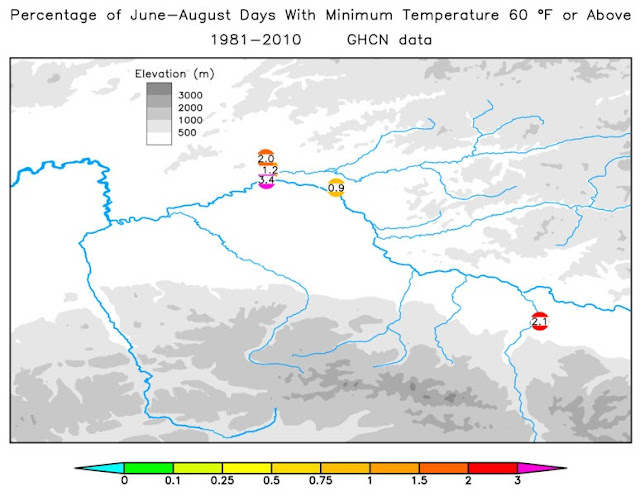 The long-term warming trend across Alaska is evident if we compare the above results to the same calculation for 1951-1980, see below.  Nearly all stations with data from both periods show a higher frequency of warm nights in the more recent decades, with notable increases at Fairbanks and Kotzebue.  A major exception is Kodiak, which showed a large decrease; this is interesting because the average minimum temperatures are slightly higher in the more recent period.  It seems Kodiak had an exceptional number of warm summer nights in the 1950's and again in 1979. 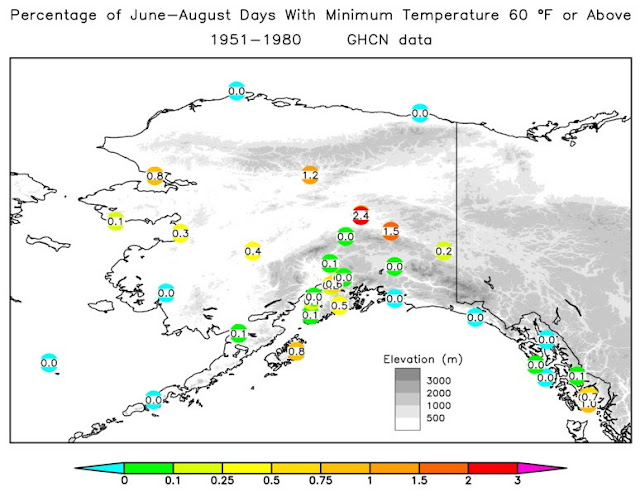 It's also interesting to look at the seasonality of warm nights; the map below shows the median date of occurrence, for locations with at least 10 events between 1981 and 2010.  Early July is the most likely time of year in the northern interior, but the median date is pushed back as you move west or south, with more maritime influence and a later seasonal peak in temperature. 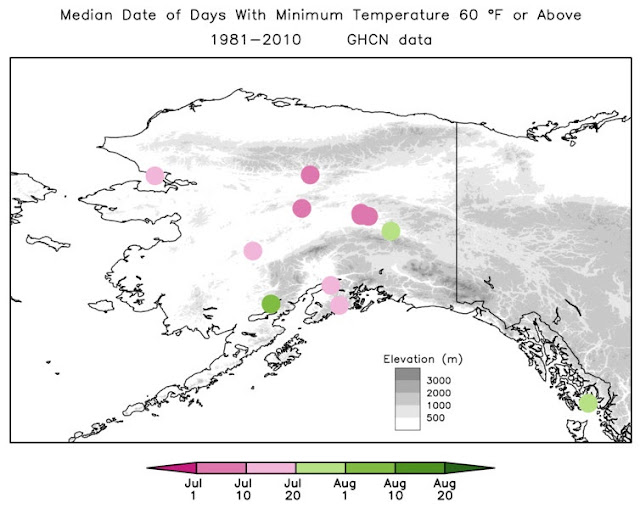 The seasonal distribution at Fairbanks airport is shown below; the frequency ramps up quickly in late June, drops suddenly after July 10, and then tapers off gradually into August.  Over 60 percent of the events are between June 21 and July 10. 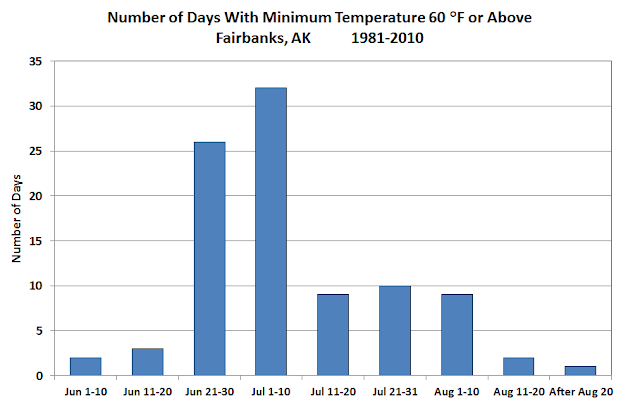 Finally, the analysis would be incomplete without a comparison of 2013 to previous years in Fairbanks, see below.  The first thing to note is that prior to 1965, 60°-plus nights were almost unheard-of in Fairbanks.  Secondly, although 2013 beats out 2004 for number of warm nights, surprisingly it is still well behind the record of 21 days in 1975.  Nearly all of the 60°-plus nights in 1975 occurred in July, which remains - by some margin - the warmest month on record in Fairbanks.  Remarkably, the monthly average high temperature in July 1975 was only 7th highest on record, but the monthly average low temperature was an extraordinary 59 °F, by far the highest on record. 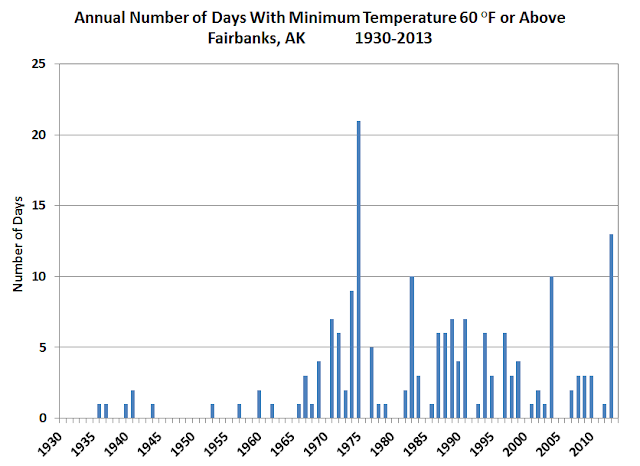