Rick's post on Sunday highlighted the hard freeze that occurred Sunday morning at certain locations near Fairbanks and in the Upper Yukon valley (notably, 16 °F at the Beaver Creek RAWS).  For those who are less familiar with Alaska climate, it is often surprising how rapidly temperatures begin to drop off in August, even while lower latitude locations are still baking in the heat of high summer.

The chart below partially explains why northern continental locations cool off so quickly.  The chart shows the percent drop in daily incoming solar radiation ("insolation") compared to the annual maximum at the summer solstice, for latitudes between 30°N and the North Pole.  Note that these are theoretical numbers assuming a clear sky (no clouds), no refraction, and no reduction in solar radiation from other factors like dust or haze.  I've plotted the data for two dates in the autumn: August 25 (blue line) and September 22 (the autumn equinox, red line).

By August 25, the maximum possible daily solar radiation has dropped by more than 35 percent in Fairbanks compared to late June, largely because of the shortened day.  In Barrow, at over 71 °N, more than 45 percent of the sun's daily energy is lost (although of course it's rarely sunny in Barrow at this time of year).  By contrast, in southern regions of the lower 48, the daily radiation has dropped only 10-15 percent by late August, which is barely perceptible to most people: the sun maintains nearly all of its summer strength.

Looking ahead to the autumn equinox, when day and night are of equal length across the globe, Fairbanks will have lost over 60 percent of its peak daily insolation, and the high Arctic will approach the long night of winter. 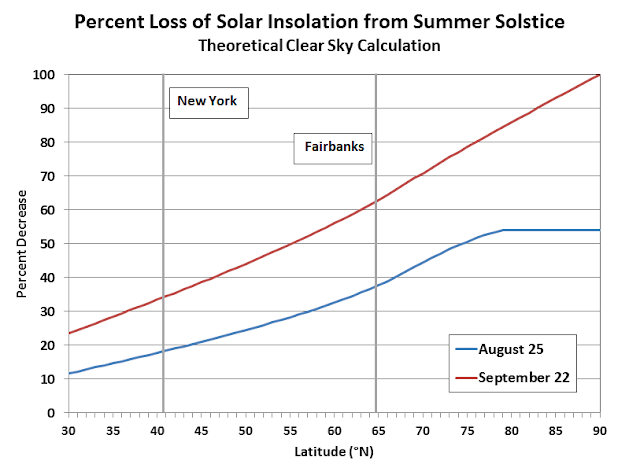