After some particularly heavy rainfall events at Keystone Ridge were relayed to me this week, I decided to look at the top 10 precipitation events for some of the major stations in Alaska (and Keystone Ridge). For each primary station, the period of record in 1953 to 2012. This period was chosen due to the consistency of the climate record at all stations. For Keystone Ridge, the period of record used in the analysis is 1996-2012. Here is an example on how to read the table. In Bethel, the 5th wettest day in each year between 1953 and 2013 saw an average of 0.51" of rain or melted snow; in Juneau, the 8th wettest day for each of those years saw an average of 1.00" of rain or melted snow; and so on. The 1.25" that fell on Keystone Ridge on August 19th is greater than the mean annual greatest event. For Anchorage, the 1.23" that fell on August 11th is also greater than the mean annual greatest event. Note that these are all single calendar day events and not 24-hour events. 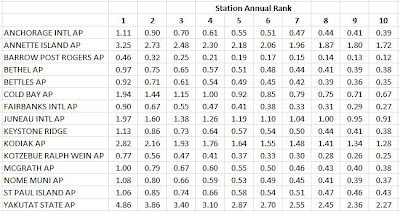 A slightly different technique is to look at precipitation percentiles. If the top 10% of precipitation events are compared to the bottom 90% of events, a modest relationship between climate regime and precipitation concentration is evident. Stations in Southeast Alaska receive under 40% of their annual precipitation from the wettest 10% of days. The percentage increases with both latitude and longitude. I expected the pattern to be much more pronounced than it actually was. A study looking at Canadian heavy precipitation events had more dramatic geographical and temporal patterns. That study was the inspiration for this analysis. (Note: this table uses top 10% instead of top 10 events because the total number of events varies dramatically across the state.) 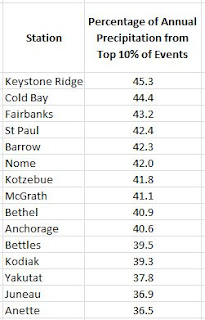 Finally, here is a temporal chart of the proportion of precipitation that falls during the heaviest 10% of events for the three largest cities in Alaska. A temporal pattern is difficult to ascertain. 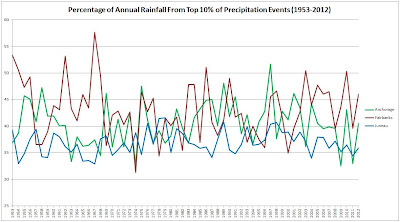 Final note: When looking at data for all stations, the volume of missing data (and missing years) made a comprehensive analysis nearly impossible. Perhaps that would be a good grant-funded project.