As a follow-up to Brian's and Rick's illuminating posts on Friday and Saturday, I thought it would be interesting to examine more closely how "unusual" the "unusual temperatures" of 2013 have been.  Brian showed that, in Fairbanks and Anchorage, temperatures more than 1, 2, or 3 standard deviations from the mean have occurred much more often in 2013 than would be expected based on the normal distribution.  The question is, how often does this occur, or might it be unpredecented in the modern historical record?

The charts below show the number of days each year since 1931 when the daily mean temperature was more than 1, 2, or 3 standard deviations from the preceding 30-year average, for dates between January 1 and August 2.  Note that I compared the temperatures to the preceding 30-year average rather than the 1981-2010 average to help reduce artifacts associated with the long-term warming trend.  For example, temperatures in 1961-1970 are compared to the 1931-1960 mean and standard deviation.  (If we used the modern mean, many of the older temperatures would look artificially cold and would boost the counts in earlier years.) 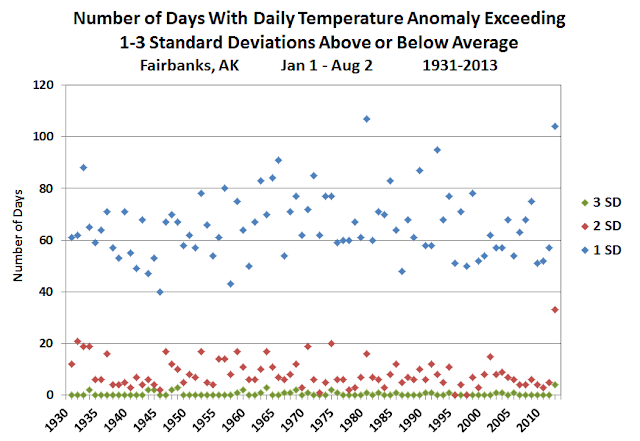 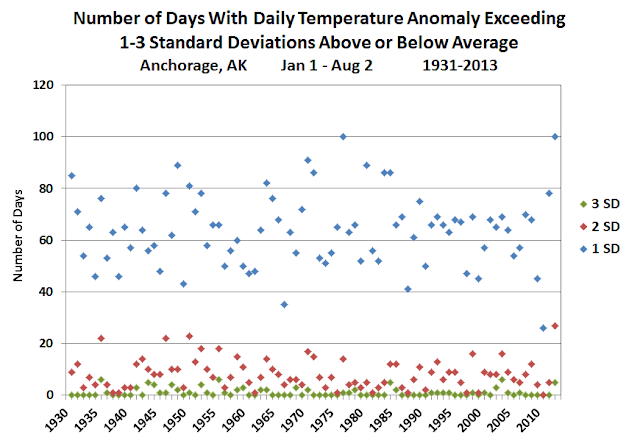 We can see that 2013 really stands out in the "2 SD or more" category, with this year's count exceeding any previously observed for both Fairbanks and Anchorage.  The number of days at least 1 SD from the mean is very high but not unprecedented, while the 3 SD count is a record in Fairbanks but not Anchorage.

Note that my numbers differ slightly from Brian's for 2013, which is probably because the calculation method was slightly different for the 1981-2010 daily means and standard deviations (a smoothing method is required).

It is interesting that the total 83-year count for the "3 SD or more" category is much higher for Anchorage than Fairbanks (87 versus 39).  If the daily temperature anomalies truly followed a normal distribution, the counts would be around 48.  This suggests that the Jan 1 - Aug 2 Anchorage temperature distribution might have "fat tails" compared to the normal distribution, i.e. a higher chance of high-sigma events.  But strong decadal variability or long-term trends could also be playing a role - more investigation is required.