The summer rainfall pattern is firmly entrenched in Southcentral Alaska. Of particular note is the number of days with substantial precipitation. So far in 2013 there have been 15 days with at least 1/3" of rain or melted snow. That is that most ever through this point in the season. The normal tally is only 8.7 days through August 19th. When looking at all precipitation events, the numbers are much closer to normal. 70 days have had at least 0.01" of precipitation while the normal number of days is 62. With all of the heavy precipitation events, it would not be surprising if 2013 had the most rainfall season-to-date of any year, but that is not the case. 2013 is in 5th place through August 19th on the list of wettest years so far. As the second chart below shows, the typical amount of precipitation on days where at least 1/3" is actually only 0.45". This tells us that there have been many days with 1/3" but very few with substantially more than that. 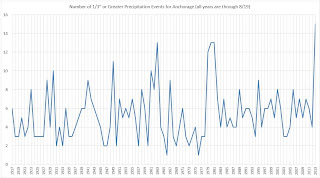 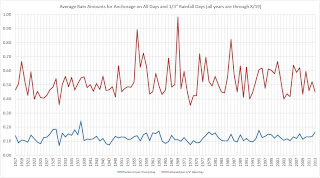