Reader Gary asked about the cause of the warm summer in much of Alaska and pointed to the upper-atmosphere flow pattern as an explanation.  In a certain sense this is undoubtedly correct, because observed weather patterns at the earth's surface are always closely related to the configuration of the air flow at various heights in the atmosphere.  This summer has seen unusually strong upper-level high pressure across Alaska, especially in the south.

Looking at a few maps, the first chart below shows the average (1981-2010) 700 mb height field in June and July, which can be thought of as the pressure pattern at about 3 km or 10,000 feet above sea level; there is a mean trough in the Bering Sea and extending into the Gulf of Alaska, and a ridge extending up from British Columbia to eastern Alaska. 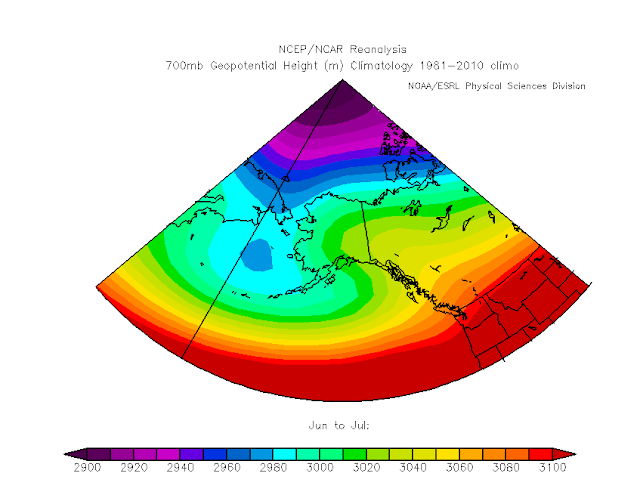 Now let's look at the average 700 mb height this summer so far (since June 1), see below.  Heights have been much higher than normal over most of Alaska, as the southeastern ridge has been very strong and the Bering Sea trough has been weak.

Taking the difference between this year's average and the long-term mean shows where the height has been most unusual, see below.

What does this all mean?  Two things, as I see it: first, the source region of the air over southern and interior Alaska has been predominantly far to the south, so that the prevailing air mass has been very warm.  Chilly Arctic air has stayed out of the picture, because the strong ridge has kept cold fronts well to the north and west.  Second, the ridge has caused subsidence and low humidity in the lower atmosphere, leading to plentiful sunshine and dry conditions, which in turn favors higher temperatures.  Thunderstorms have been scarce because the atmosphere has been stable.

Having said all this, in my view the upper-air flow pattern is ultimately unsatisfying as an explanation for the warm weather, because the question immediately turns to "what caused the ridge"?  Why did the weather pattern evolve this way in the summer of 2013?  This is an enormously difficult question, and I only have one small piece of possible insight to offer: this summer's pattern may (perhaps) be (partially) related to the phase of the Quasi-Biennial Oscillation (QBO).  The QBO is a fairly regular cycle in east-west winds in the tropical stratosphere, i.e. about 15-50 km above sea level at the equator.  Over a period of about 2-3 years, the wind direction reverses from east to west and back again, and it is known that the phase of the oscillation affects weather and climate variations around the globe.  This summer there happens to be a strongly positive phase of the QBO, so I looked up previous years with similar phase and found the following pattern of 700 mb heights near Alaska: 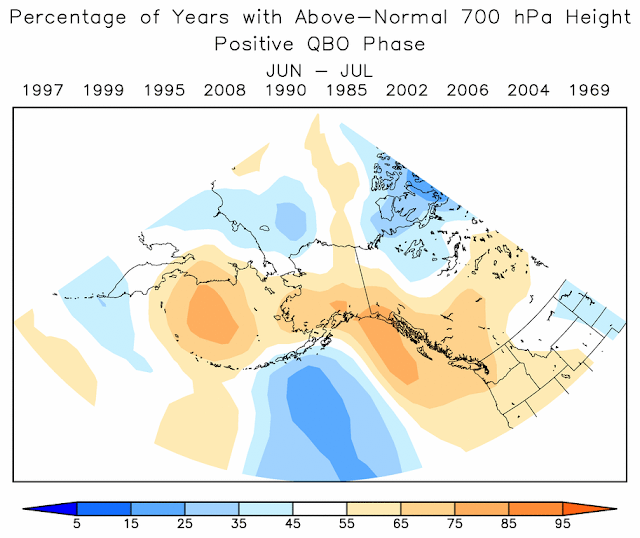 The map shows that higher heights are more common from the Bering Sea to southeast Alaska when the QBO phase is significantly positive in summer.  So it's possible that the QBO phase this summer raised the likelihood of a strong ridge developing over Alaska, although it certainly cannot be cited as the only reason.  Note that several of the top QBO years listed on the map brought cool summers in Fairbanks (e.g. 2008, 2002, 2006), so it is far from a one-to-one correlation.  Also, I can't comment on the exact mechanism by which the QBO might influence the flow pattern near Alaska - it's purely a historical observation and may be a coincidence.

Rick and Brian may have more to add on causes of the warm summer - and any other insight or suggestions from readers would be most welcome.

Posted by Richard James at 5:05 AM