Implications of a Warm Dry Summer

The very warm, dry summer that occurred this year in interior Alaska raises the question of whether similar tendencies are likely to persist in the months ahead - in other words, is warmer and drier than normal weather likely to continue on average?

One way to explore this question is to look at previous years in which the summer was warm and dry, and then examine what happened in the subsequent months.  This is a kind of analog technique in which we explore the historical data to see if there might be any predictability based on the observed anomalies.  There are at least two possible reasons why we might hope for success: it's possible that whatever caused the summer warmth might continue to act as a consistent forcing through the next few months; or perhaps the sea surface temperature patterns that have emerged over the summer near Alaska might help nudge the autumn climate in one direction or another.

I chose to base the investigation (at least initially) on Fairbanks temperature and precipitation between June 1 and August 15, which this year were the 2nd highest and 4th lowest on record, respectively (since 1930).  I picked out all years since 1930 which had June 1 - August 15 temperature in the top 25% of all years AND June 1 - August 15 precipitation in the bottom 25% of all years; this provides 11 "analog years".  The summer was significantly warmer and drier than normal in all these years.

I then pulled out the temperature and precipitation data from the subsequent months in these years and classified each month as "below normal", "near normal", or "above normal", based on an equal division of the data in the 1951-2010 period.  The chart below shows the results for September, for Barrow, Fairbanks, and Anchorage; the colors indicate the number of years out of 11 that fell into each category.  So for example, Fairbanks September temperature was above normal in 3 of the 11 years, near normal in 3 of 11, and below normal in the remaining 5 years.  More significantly, September precipitation was below normal in 8 of the 11 years, suggesting that there is a good chance that September will be dry overall in Fairbanks (but see a cautionary note at the bottom).

The other major signal that emerges for September is at Barrow, where 7 of the 11 years were wetter than normal, and none of the 11 were drier than normal; thus Barrow seems quite likely to be wet. 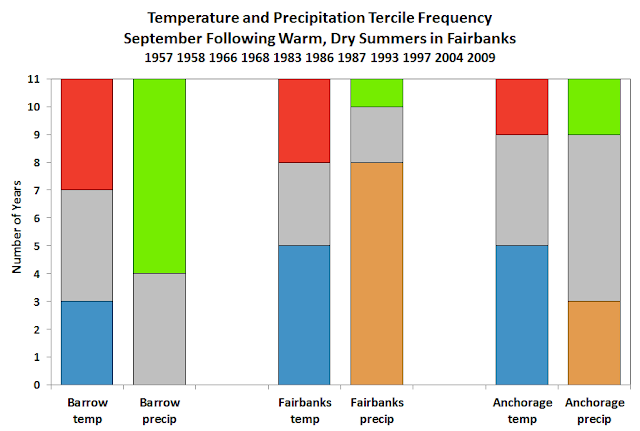 The corresponding charts for October and November are shown below.  Interestingly, all three locations show a preference for above normal temperatures in October (especially Barrow), and in November the warm signal becomes relatively strong for Anchorage. 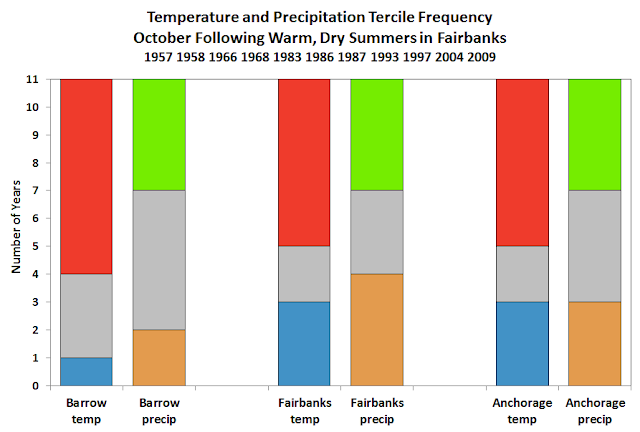 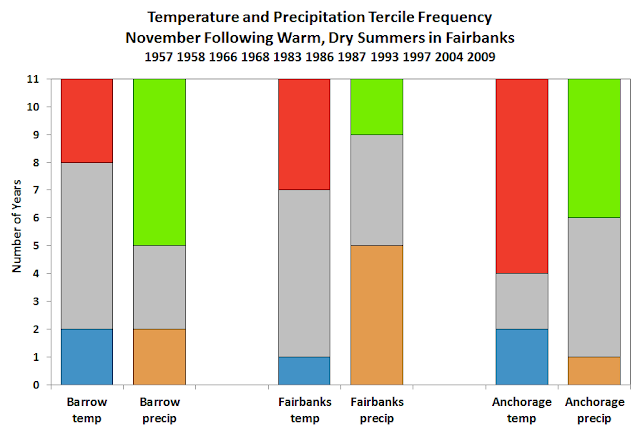 Another way of looking at the patterns in the analog years is to examine some maps.  The first map below shows the frequency of above normal 500 mb height in September; note that here I am simply comparing to the 1951-2010 mean rather than the three-way terciles (i.e. the map has no near-normal category).  There seems to be a fairly clear-cut signal for low heights in the Chukchi Sea, and the second map below shows a tendency for low pressure along the North Slope; this would explain the high chance of a wet September in Barrow.  It's not entirely clear why Fairbanks would be dry, unless perhaps the favored higher pressure over eastern Siberia means that the flow is more likely to be northwesterly (drier) rather than southwesterly (wetter) over interior Alaska. 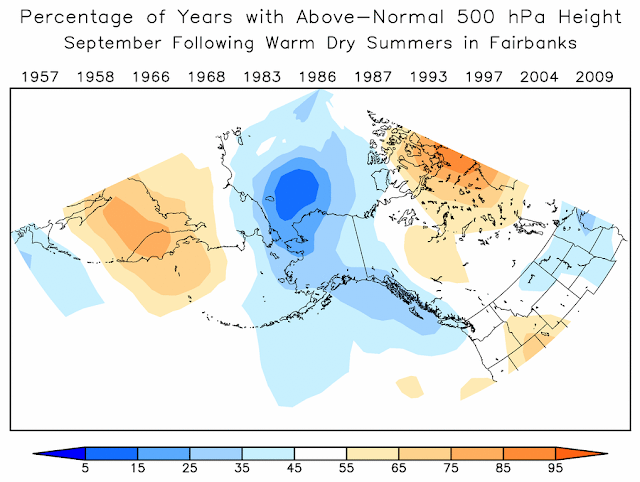 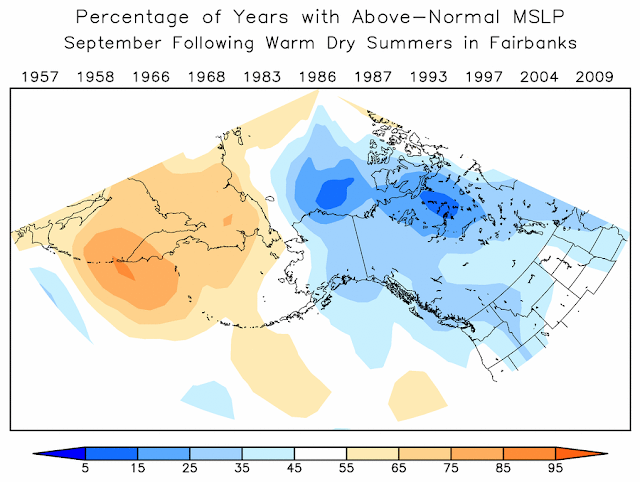 The next three maps show the analog temperature pattern for September through November.  These are based on the NCEP global reanalysis, and so the quality is probably "questionable" over Alaska; but the general trends should be approximately correct.  In agreement with the charts above, we see a slight warm signal for the North Slope in September, more so for October, and then a rather notable warm signal for most of southern Alaska in November. 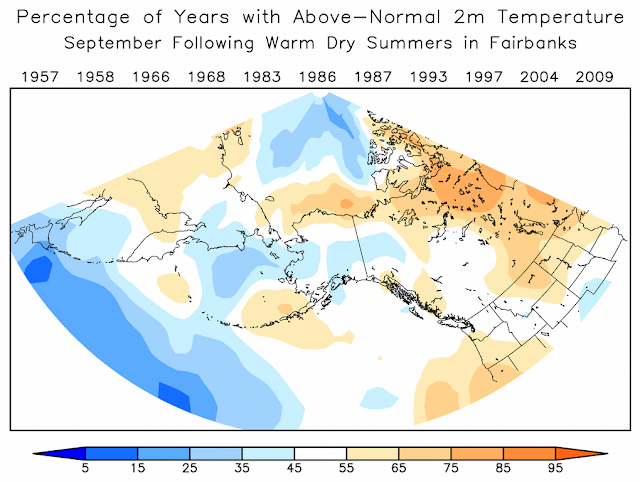 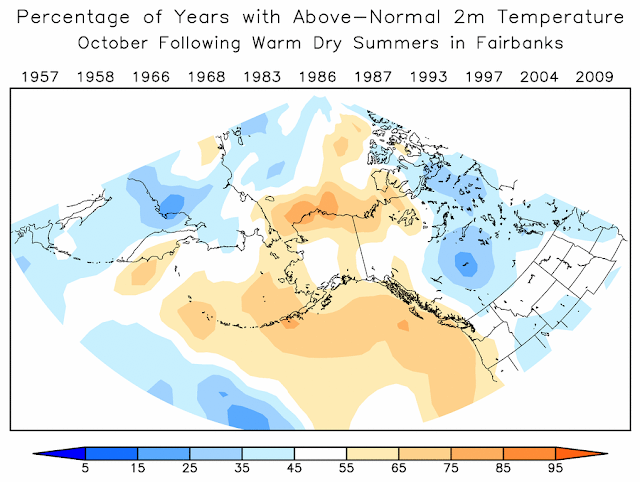 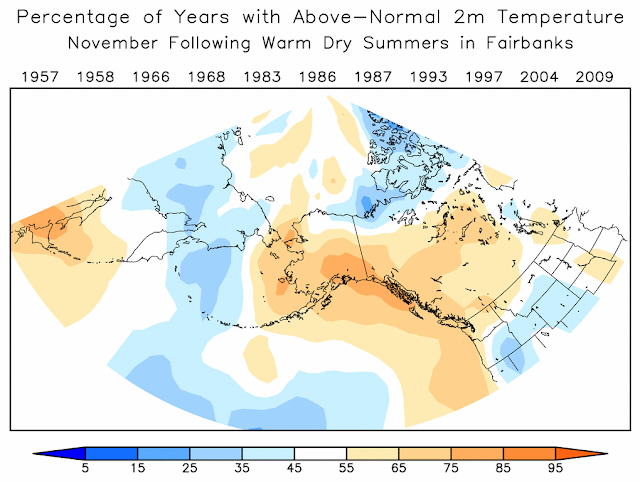 So to answer the original question: based solely on the history of past warm/dry summers, it seems likely that unusually dry weather will re-emerge in September in Fairbanks, but there's no indication that September will be unusually warm.  In fact, there is a slight signal that early autumn will be cooler than average.  For example, in Fairbanks 8 of the 11 analog years first reached 25 °F earlier than usual, and 7 of the 11 years saw the first half-inch or greater snowfall earlier than usual.  In October and November, the summer analog suggests warmer than average temperatures as the most likely outcome, especially for southern Alaska in November.  One caveat here is that a negative PDO (Pacific Decadal Oscillation) phase, as we're currently seeing, would favor a cold November in the south, so that raises the level of uncertainty for the November outcome.

** Note: forecasts for many weeks or months in advance are rife with uncertainty, and analog indications like these usually give only a hint of where the probabilities may favor one side of the climate distribution or the other.  We have to bear in mind that random chance alone can produce patterns and apparent signals in the data, so some of what we see here may be a statistical fluke.  To be precise, when we randomly select any 11 years and categorize the data into terciles, there is about a 37% chance that 6 or more of the years will fall into one of the categories, leaving 5 or fewer years in the other two categories.  The chance of 7 or more years in one category is about 12%, and the chance of 8 or more is 2.6%.  So when we see 6 of 11 years in the warm category for Fairbanks in October, there is only a 63% chance that this is a "real" signal, not random chance.

Posted by Richard James at 3:39 AM