The Fairbanks International Airport has observed smoke the last several days from the Mississippi Fire near Delta Junction. So where does the summer of 2013 rank in terms of the number of smoky days in Fairbanks? Through August 10th, 9 days have recorded smoke during the hourly observations. Since 1997, smoke was observed an average of 10.6 days during the months of June, July, and August. It appears that Fairbanks is on track for an average number of smoky days. 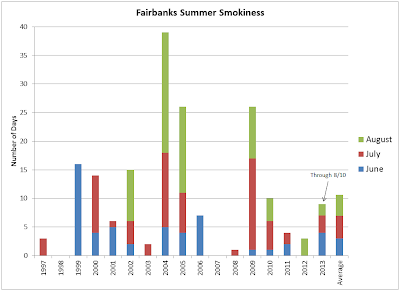