Solar Angle or Length of Day?

In response to my last post about diminishing solar insolation, readers Gary and Mike suggested that the rapid late summer decline in available solar radiation has more to do with the decreasing angle of the sun above the horizon than the decreasing length of day.  It is an interesting question as to which of these effects is more significant in reducing the available solar energy as the season advances.  Is the pronounced loss of solar insolation at this time of year mainly caused by the sun being lower in the sky and thus "weaker", or is the shortening of the day mainly responsible?

The first thing to notice is that the solar angle is clearly the only factor at play in the high Arctic (say above 80 °N), where the first sunset of autumn is only now approaching.  With the sun continuously above the horizon until now, length of day is not an issue; the rapid decline in solar insolation is ALL caused by lower sun angle.  This fact also suggests that solar angle may be the most significant part of the equation at other less extreme northern latitudes, such as Fairbanks.

To take a closer look at the problem, I used the theoretical minute-by-minute solar insolation calculation to determine the loss of incoming radiation caused only by the shortening of the day.  This is simply the amount of radiation received on June 21 during sunlight hours that no longer exist on subsequent dates.  For example, on August 1 in Fairbanks the length of day is over 3 hours shorter than on June 21, so we can say that the shortening of the day caused the loss of the radiation in those 3+ hours.  The chart below shows the accumulation of this loss with the red markers.  The green markers show the total percentage loss of insolation since the solstice (note the 63% value on September 22 matches the results in my prior post).  Finally, the blue markers show the difference, which we can call the loss from decreasing solar angle. 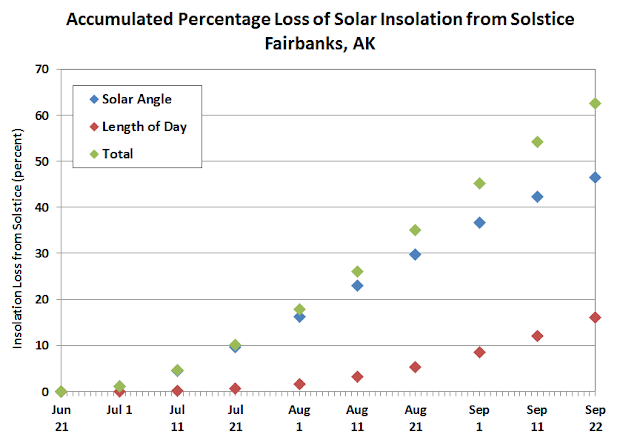 Based on these results, the answer is clear: decreasing solar elevation angle is a much bigger contributor to the total late summer decline in solar insolation.  The shortening of the day becomes a significant factor as the autumn advances, but the elevation angle is the dominant player.  Kudos to Gary and Mike for intuitively recognizing this, and for helping to clarify my thinking.