August 29th is the anniversary of the earliest snow on record for Fairbanks. On 8/29/1922, 3.0" of snow was recorded. This is the only instance of an August snow event. The second earliest snow occurred on September 2nd, 1980, when 1.6" fell. The normal first measurable snow falls on September 29th. The latest first snow on record was back in 1918 when no snow was measured until October 31st. A close second place was 1969 when the first snow waited until October 29th. Snowfall records began in Fairbanks in 1914. The normal first snowfall is September 30th. As for snowpack, that typically sets in about two weeks after the first snowfall (October 15th). The earliest winter snowpack was established on September 13th in 1992 and the latest was on November 11th in 1962. (Note: the date of onset was identified by the first date when the snow depth existed for at least 21 consecutive days.) 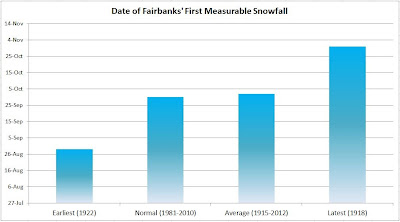 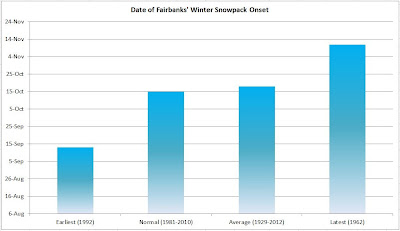